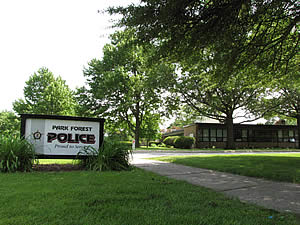 Park Forest, IL–(ENEWSPF)–Editor’s Note: This week a brief report after last week when we "caught up" from a bit of vacation time. Besides covering the many stories from around Park Forest that otherwise might go unnoticed, we want to bring more complete coverage of police reports than is reported by other local media.

Three windows of a residence in the 200 block of Arrowhead Street were reported shattered on August 7.

A juvenile was arrested on August 9 and issued a municipal ticket charging disorderly conduct when police were dispatched to the area of Gentry and Indiana Streets to investigate a report of a subject chasing another subject with a gun. After investigating, police determined that one juvenile was allegedly chasing two of his friends with a BB gun. Police located all juveniles inside the same residence.

An officer was dispatched to the intersection of Sauk Trail and Western Avenue on August 9 to investigate a report of domestic battery. Police have suspect information and continue to investigate.

Christopher C. Wilson, 31, 246 Sangamon Street, Park Forest, was arrested on August 10 and charged with possession of cannabis when detectives, traveling southbound on Western Avenue near Norwood Boulevard observed a vehicle in front of them swerving in and out of lanes, according to police.

An officer was dispatched to the 200 block of Allegheny Street on August 10 when an anonymous caller stated that a man and his dog were being attacked by a "vicious pit bull" in that block. When police arrived, they spoke with a man who said that while walking his dog, a pit bull ran from the driveway in the 200 block of Allegheny Street and began mauling his dog. The man picked up a large piece of wood that was lying on the ground and struck the pit bull in the head, at which point the pit bull released the man’s dog and ran back towards the front door of the residence. Police observed that the man’s dog was bleeding from the neck and head and was unable to support any weight on one of his front legs. The incident was forwarded to the Community Service Officer for follow-up.

Two black Dell e6500 laptop computers and one charger valued at $1000 each and two gold-colored necklaces valued at $20 each were reported stolen from a residence in the 500 block of Homan Avenue on August 11.

Darrelle D. Hulbert, 30, 437 Indianwood Blvd., Park Forest, was arrested on August 11 and charged with one class 4 felony count of unlawful possession of cannabis. Hulbert was a passenger in a vehicle that was pulled over in the area of Western Avenue and Hemlock Street because the vehicle did not have a functioning rear registration plate light, according to police. The driver of the vehicle, Jeffrey A. Johnson, 32, 800 Woodlawn Ave., Ford Heights, was issued a municipal citation charging no rear registration plate.

An HTC Hero cell phone was reported stolen from a vehicle in the 300 block of Miami Street on August 12. The vehicle had been left unlocked with windows down.

Two juveniles were arrested on August 13 and issued municipal citations charging disorderly conduct by disturbing the peace when police were dispatched to the 200 block of Nauvoo Street to investigate a report of suspicious subjects.