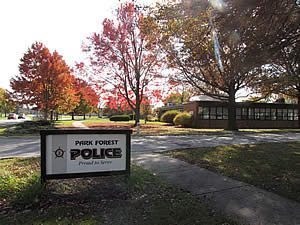 A purse was reported stolen from a hallway in the 23400 block of South Western Avenue on January 8.

Police discovered an unsecured door at a residence in the 300 block of Winnebago Street on January 9 when an officer was dispatched to do a premise check.

Jemmen D. Surratt, 36, 417 Lakewood Blvd, Park Forest, was arrested on January 9 and charged with assault when police responded to the area of Orchard Drive and Lakewood Boulevard to investigate a report of battery. A juvenile was also arrested and charged with aggravated battery and obstructing identification.

A juvenile was arrested on January 9 and processed on a charge of aggravated assault when police were dispatched to the 300 block of Neola Street to investigate a report of a domestic disturbance.

A 46-inch flat-screen television valued at $500, a Panasonic laptop computer valued at $800, three plastic drawer organizers containing several miscellaneous jewelry items and a statue valued at $1000 were reported stolen from a residence in the 200 block of Allegheny Street on January 11.

Two 19-inch Dynex flat-screen televisions valued at $200 each, a gold wedding ring valued at $3000, $110 cash, a PlayStation 3 game console value to $300, and a Samsung Galaxy telephone valued at $300 were reported stolen from a residence in the 200 block of Arrowhead Street on January 11.

A resident told police on January 11 that he received a letter from Capital One Bank indicating that there appeared to be fraudulent activity on his account. The man told police he had never banked with Capital One. Police are investigating.

Someone stole eight cartons of cigarettes from CVS Pharmacy, 1 Main Street, Park Forest, on January 12. The total value stolen was $623.12. The suspect is described as a female wearing a dark colored waist-length hooded jacket with what appeared to be white fur trim around the hood and dark colored pants.

A juvenile was arrested on January 12 and processed on a charge of misdemeanor resisting a peace officer and disorderly conduct/false 911 alarm, when police were dispatched to the 200 block of Allegheny Street to investigate a report of a burglary in progress.

Police were dispatched to the 300 block of Neola Street to investigate a report of a residential burglary on January 12. Police gathered evidence from the scene although nothing appeared to be missing.

Darren D. Phillips, 41, 246 Miami St., Park Forest, was arrested on January 13 and charged with battery when police were dispatched to investigate a report of a disturbance in the 300 block of Blackhawk Drive. Phillips was additionally processed on an outstanding arrest warrant out of Cook County on a charge of driving while license was suspended, according to police.

Police were dispatched to Illinois School, 210 Illinois Street, on January 13 to investigate a report of arson. According to police, some girls had started a fire in one of the garbage cans inside one of the girl’s bathrooms. There were no arrests. The school told police that the matter would be handled internally.