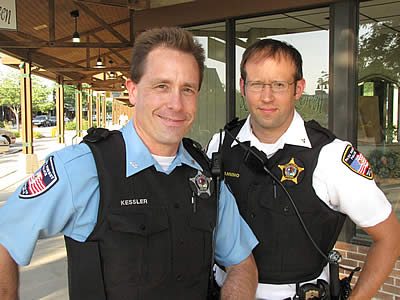 Lamont A. Fleming, 18, and Doron D. Fleming, 20, both of 283 Allegheny St., Park Forest, were arrested on June 15 and charged with possession of cannabis when detectives patrolling in the area of Forest Boulevard and Lakewood Boulevard observed a vehicle traveling southbound on Forest Boulevard make a right turn onto Lakewood Boulevard without using a turn signal, according to police. A third party, the driver of the vehicle, received traffic citations charging failure to signal when required and operation of an uninsured motor vehicle.

Police were dispatched to a residence in the first block of South Arbor Trail on July 16 to investigate a report of unlawful visitation interference. Police have suspect information and continue to investigate.

Police were dispatched to Somonauk Park, 251 Somonauk Dr., on July 16 in reference to a report of criminal defacement. A passerby observed gang graffiti on the pavilion in the park. Police observed the graffiti also and gathered evidence from the scene.

A Lenovo laptop computer valued at $500 was reported stolen from a residence in the first block of Allegheny Court on July 17.

Leslie D. Taylor, 23, 27 S. Arbor Trail, Park Forest, was arrested on July 17 and charged with obstructing a peace officer and obstructing identification when police responded to the 100 block of East Sycamore Drive in reference to a report of a large fight involving a subject with a gun.

An unknown person or persons vandalized four garages in the 200 block of Krotiak Street with red spray paint. The incidents, reported on July 18, included two red six-pointed stars on two garages, a red swastika on another, and the letters "KKK" spray-painted on another. Police continue to investigate.

Michael A. Barnes, 35, 1934 Bunker St., Chicago Heights, was arrested on July 19 and charged with domestic battery, interfering with the reporting of domestic violence and criminal damage to property after he arrived at the Park Forest Police Station to answer questions regarding an incident originally reported on July 14.

Police were dispatched to the 200 block of Minocqua Street on July 19 regarding a report of an attempted residential burglary. A resident reported hearing a tapping or knocking sound coming from the front of her house at approximately 2 AM. While cleaning the back porch at about 9:30 AM, she discovered that the back patio door had been struck by an unknown object and there was a large hole in the glass near the lock. Police gathered evidence from the scene and continue to investigate.

A resident told police on July 19 that close to $1000 had been fraudulently withdrawn from her bank account since the beginning of July. Police continue to investigate

Police responded to a residence in the first block of Cherry Street on July 19 to investigate a report of criminal damage to property. Police discovered that the lower panel of a wooden door of the residence had been shattered as if it had been kicked, according to police.

An iPad charger and a number of personal items were reported stolen from a residence in the 100 block of Peach Street on July 19.

Police were dispatched to a residence in the 200 block of Gold Street on July 19 to investigate a residential burglary. A resident related that she went downstairs and observed that a door to the residence had been forced open. A number of keys were reported stolen.

Police were dispatched to a residence in the 200 block of Mantua Street on July 20 to investigate a report of domestic battery. Police have suspect information and continue to investigate.

A bag that had been left unsecured in the men’s locker room at the Park Forest Aqua Center was reported stolen on July 20. Among the items taken was a mobile phone.

Perron E. Evans, 53, South Holland, was arrested on July 19 and charged with criminal trespassing when police were dispatched to the 100 block of Main Street to investigate a report of trespass to a residence.

Richard McElroy, 59, 221 Juniper St., Park Forest, was arrested on July 21 and charged with possession of drug paraphernalia, driving with a suspended license and improper turning when an officer observed the vehicle McElroy was driving allegedly make an improper left turn from Western Avenue onto North Street, according to police.

Elroy Jones, 25, 106B Indianwood Blvd., Park Forest, and Nathan L. Moore, 30, 161 Hemlock St., Park Forest, were arrested on July 21 and issued municipal citations charging public intoxication when police responded to a business in the first block of South Orchard Drive in reference to a report of two intoxicated subjects. Police discovered the men on the east side of the business. Police say both subjects had slurred speech and smelled of an alcoholic beverage. Police say Jones appeared to be severely impaired, requiring assistance to stand.

Police were dispatched to the Park Forest Police Department on July 21 to investigate a report of fraud. A resident reported receiving a bill from T-Mobile, her cell phone provider, with a charge for a new cell phone number which he did not recognize. Police continue to investigate.

An M16 Airsoft electric-powered rifle and an M16 Airsoft spring-powered rifle were reported stolen from a vehicle parked in the 100 block of Algonquin Street on July 22. Both rifles, purchased from a sporting goods store, have a value of approximately $160, according to police.

Kevin E. Brown, 49, 9 Lakewood Ct., Park Forest, was arrested on July 22 and charged with domestic battery when police were dispatched to the first block of Lakewood Court to investigate a report of domestic battery.

Bernard Foster, 36, 2807 W. 141st Place, Blue Island, was arrested on July 22 and charged with domestic-related criminal damage to property and domestic-related assault when police were dispatched to the 100 block of Algonquin Street to investigate a report of a domestic disturbance.

The rear kitchen window of a residence in the 100 block of Algonquin Street was reported shattered on July 22.

Previous articleIn and Around Park Forest Week of July 25, 2011
Next articleHarbor Light Hospice Needs Volunteers in the South Suburbs