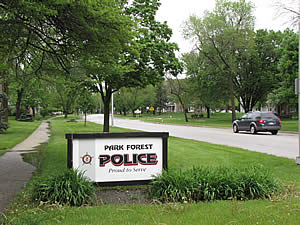 Special thanks to Ken and Sue Kramer for sharing their proofreading expertise on these reports.

A 40-inch Proscan television, a Movado watch valued at $850 and a Skagen watch valued at $450 were among items reported stolen from a residence in the 3800 block of Western Avenue on May 6.

Police were dispatched to CVS Pharmacy, 1 Main Street, on May 7 to investigate a report of a man who ran from the store carrying a bottle of alcohol without paying. The man is described as a black male, approximately 5’8″, medium build, with sideburns, wearing a gray baseball cap, beige pants, black shoes and a black hooded sweatshirt. Police gathered surveillance video from the store and continue to investigate.

Eric P. Stover, 50, 132 Indiana St., Park Forest, was arrested on May 7 and charged with one count of felony aggravated battery to a police officer, resisting a peace officer, criminal damage to property, and processed on a warrant out of Will County, when police went to that address with a warrant for Stover’s arrest.

Ovirtus M. Dunnon, 18, 175 Indianwood Blvd., Park Forest, was arrested on May 7 and charged with assault when police were dispatched to the 100 block of Indianwood Boulevard in reference to a report of a fight.

Police were dispatched to the 400 block of Lakewood Boulevard on May 7 to investigate a report of a disturbance. Police were informed by dispatch that juveniles at the scene reported hearing a “pop,” possibly a gunshot. When they arrived, the teenagers informed them that two subjects began to follow them while they were walking from Sauk Trail. One reported seeing one of the subjects pull a silver semi-automatic handgun, possibly a .22 caliber weapon, from the left pocket of his hoodie, point it in the air and shoot once. Police continue to investigate.

Police were dispatched to the Park Forest Police Department on May 8 to investigate a domestic battery incident. Police have suspect information and continue to investigate.

Two juveniles were arrested on May 8 and charged with resisting a peace officer when an officer patrolling in the area of Sauk trail and Indianwood Boulevard observed a group of juveniles begin to run away from him when they saw his car approaching.

A juvenile was arrested on May 11 and processed on a charge of disorderly conduct and resisting/obstructing a peace officer when an officer working at Rich East High School observed students involved in an altercation in a school hallway.

The catalytic converter of a vehicle parked in the 211th Metra Lot, 520 Homan Street, was stolen from the vehicle on May 11.

A man told police $2907.20 was stolen on May 12 from his bank account after he lost his wallet in mid-April. The man told police that he believes he may have had his pin number for his debit card in his wallet.

The left side of a vehicle parked in the 300 block of Oakwood Street was scratched twice and reported to police on May 12.

A PlayStation 3 game console valued at $300, a 42-inch Vizio flat-screen television valued at $299, a Dell laptop computer valued at $500, a Dell notebook computer, and a Garmin GPS valued at $100 were reported stolen from a residence in the 100 block of East Sycamore Street on May 12.

Police were dispatched to the 2800 block of Western Avenue on May 13 to investigate a report of domestic battery. Police have suspect information and continue to investigate.

Previous articleButane Pipeline Leak in Romeoville
Next articleIn and Around Park Forest Week of May 16, 2011