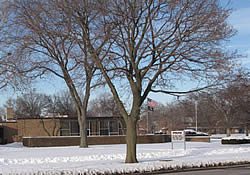 A juvenile was arrested on November 19 and charged with criminal damage to property when an officer was dispatched to the 300 block of Winonah Street to investigate an incident wherein a rock had just been thrown through the window of a residence.

Police responded to a report of several incidences of criminal defacement in the first block of Fir Street on November 21. Police observed spray-painted letters on the walls of several residences in that block. Police have suspect information.

Juan Fernandez, 31, 600 W. 15th St., Chicago Heights, was arrested on November 21 and charged with driving while license was revoked, no insurance, driving in the wrong lane, and obstructing identification. Additionally, Fernandez was processed on a warrant from Chicago Heights on a DUI charge. The vehicle Fernandez was driving was pulled over at approximately 3:15 a.m. when an officer reported seeing the vehicle traveling eastbound on 26th Street in the westbound lane of traffic, according to police.

Tierra I Davis, 29, 267 W. Hickory St., Chicago Heights, Katherine O. Pippen, 23, 29 Olympic Village, Chicago Heights, and John D. Williams address unknown, were arrested on November 21 and charged with possession of a controlled substance when a two officers noticed a subject standing in the middle of the street approaching several vehicles that were stopped waiting for a train to pass. The officers recognized the subject as John Williams from numerous previous contacts, according to police. Williams was additionally charged with walking in the street.

A window of a residence in the 100 block of Hemlock Street was reported shattered on November 22.

A white General Electric side-by-side refrigerator valued at $1193.68 was reported stolen from a residence in the 300 block of Oakwood Street on November 22.

Police were dispatched to the first block of Marquette Street on November 22 to investigate a possible burglary. A resident reported hearing someone inside her house. She told police she yelled and then heard a door of the residence open and close, followed by the sound of a car driving off. Nothing appeared to be missing from the residence, according to police.

A vehicle parked in the 200 block of Forest Boulevard was reported scratched several times by a key or screwdriver on November 22, according to police.

Lee Roy Torrence, 51, 5428 Chestnut Ave., Hammond, IN, was arrested on November 23 and charged with felony burglary and possession of burglary tools when an officer on patrol observed an older model pick-up truck pull out of the west parking lot of 90 North Street. Police recovered several items from the truck believed to be stolen, according to police.

A catalytic converter valued at $250 was reported stolen from a vehicle parked at the Metra commuter parking lot, 520 Homan Ave., on November 23.

A driver’s license, several music CDs and $120 wrapped in an unpaid water bill were reported stolen from a vehicle parked in the 300 block of Blackhawk Drive on November 24.

Jevon D. Thomas, 32, 129 Illinois St., Park Forest, was arrested on November 24 and charged with domestic battery when police responded to the 100 block of Illinois Street to investigate a report of a disturbance.

A Garmin C330 Street Pilot GPS valued at $50 was reported stolen from a vehicle parked in the 200 block of Green Street on November 24.