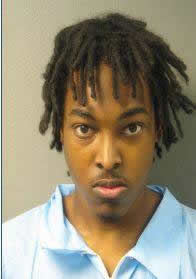 Park Forest, IL–(ENEWSPF)– The Park Forest Police Department released a statement regarding an arrest in connection with an October 18, 2015 shooting on Dogwood Street. A 16-year-old juvenile was the victim. His injury was non-life threatening, according to police.

Jordan Anderson (pictured), age 19 of the 400 block of Dogwood St., Park Forest, has been charged with Reckless Discharge of a Firearm following a shooting on 10/18/15 at approximately 12:45pm in the area of Dogwood St. and Western Avenue that resulted in the non-life threatening injury to a 16 year old juvenile. Aaron Lewis, age 22 of Richton Park (not pictured), was also charged with Obstructing Identification in relation to that investigation. Additionally, two firearms were recovered pursuant to that investigation.

Both of these disturbing incidents occurred in neighborhoods with very low reported incidents of crime, and in each case, the victim was believed to be specifically targeted. In each case the Crime Free Housing Ordinance is being pursued against those criminally charged. We are outraged that the violence that has plagued the Chicago area for several years is affecting our Village, and the Park Forest Police Department remains committed to active patrols to prevent these types of situations, as well as putting full investigative effort into making arrests when they do occur.

Thank you to the patrol officers who quickly responded to violent and chaotic situations, to the diligent investigators who worked tirelessly to make arrest and recover firearms in these cases, and to all of the citizens who called police and assisted in providing information which helped lead to the arrest of offenders and the recovery of deadly weapons. Together we will continue to send the message that we will not tolerate acts of violence in our community.