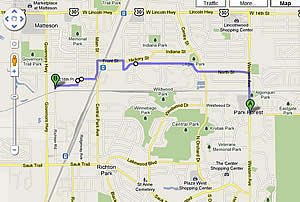 Park Forest, IL–(ENEWSPF)– One Park Forest officer helped recover a vehicle stolen out of Chicago Heights moments after the car was reported stolen. The vehicle was only recovered after a high-speed chase, and the alleged car thief was able to escape into the night woods.

Officer Rimovsky pursued a man driving a stolen vehicle the night of Wednesday, October 20, after observing the driver of the vehicle allegedly disobeyed a signal light at the intersection of Western Avenue and North Street. The suspect vehicle traveled from Western Avenue on North Street, disobeying the traffic signal at North Street and Orchard Boulevard while accelerating rapidly to speeds in excess of 80 mph, according to police. The vehicle then turned into the Metra commuter parking lot on off Homan Avenue, almost striking the officer’s squad car as it drove through the lot and exited onto Homan Avenue.

Police say the vehicle then traveled northbound on Hickory Street and westbound on Front Street (Note: Hickory Street becomes Front Street in Matteson), blowing a stop sign while traveling in excess of 70 mph, according to police. The vehicle then turned south on Main Street, again disregarding a stop sign, then west on 216th Place, southbound on Maple Street, and west onto 217th Street, again without stopping at stop signs, according to police.

Finally, police say the vehicle turn South on Richton Road, accelerating at a high rate of speed toward the dead-end street of Richton Road and the Canadian National Railroad tracks, were the vehicle struck the "Dead End" sign, finally coming to a stop.

Police say the driver exited the vehicle and ran on foot southbound across the railroad tracks and into the wooded area, according to police. Police say the offender was a black male, 6’1", 190 pounds, wearing a black long sleeve shirt, blue jeans and a black baseball hat. Officer Rimovsky secured the vehicle and waited for backup units to arrive.

The officer noticed that the steering column of the vehicle had been peeled and a screwdriver and flashlight were on the driver’s side floorboard. The vehicle had been reported stolen out of Chicago Heights shortly before Officer Rimovsky began pursuit.