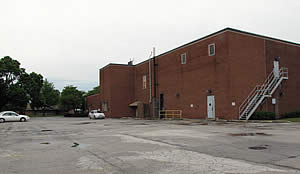 Park Forest, IL-(ENEWSPF)- A woman told police she was sexually assaulted in a parking lot behind the building owned by AT&T, across the street from the Park Forest Library.

Police were dispatched to the 100 block of Washington Street on May 27 at 1:47 a.m. to investigate a report of criminal sexual assault. A woman reported that she had been walking southbound from Central Park toward the AT&T building when she observed a subject following her. She related that she continued walking and was eventually stopped by the subject at the rear of the AT&T building, 20 South Orchard Drive.

While behind the building, the subject who had been following her saw another subject near the building and asked, "Who is that?" She responded, "That’s my husband." After learning that her husband was near, the suspect allegedly grabbed her by the coat and pulled her out of sight from her husband. Once they were out of sight, the suspect allegedly pulled a knife from his pocket, placed it by her throat and allegedly told her that she must perform oral sex on him or "I’m going to kill you and your baby," according to police.

The woman said she performed oral sex on the man because the knife was against her throat, in fear for her own safety and that of her unborn child.

After the alleged assault, the woman related that the man put the knife in his pocket and began walking northbound.

Police have suspect information and continue to investigate.

Previous articleJuvenile Allegedly Breaks Into Home On Indiana Street
Next articlePark Forest Police Reports for May 30, 2011