Two Charged In Shooting Death of Darren B. Easterling 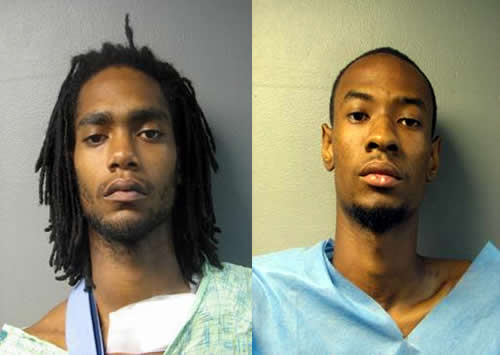 Michael Reed, left, age 21, and Jamaal Carter, age 24, were charged in connection with the shooting death of Darren B. Easterling, age 25. (PHOTO: PFPD)

Park Forest, IL-(ENEWSPF)- eNews Park Forest has learned two men were charged in connection with the July 22, 2012 shooting in the village’s East Lincolnwood neighborhood that left one man dead.

According to a press release from the Park Forest Police Department dated July 26, 2012, but just received by ENEWSPF today, August 10, on Sunday, July 22, 2012, at approximately 1:50p.m., Park Forest Police Units were dispatched to the area of Herndon and Indiana Streets for a “shots fired” call. On arrival, police say they found a male subject laying on the right a way near that intersection. The man had been shot several times, according to the release. The subject was unresponsive and declared dead at the scene, according to the release. At that point, the commander of the investigations unit was notified and he activated the South Suburban Major Crime Task Force who responded to the crime scene and began their investigation.

The deceased subject was identified as Darren B. Easterling, age 25, with a last known address of 6350 Sangamon St., Chicago, Il. An autopsy was performed on July 23, 2012, by the Cook County Medical Examiner’s Office, and the cause of death was ruled a homicide.

On July 25, 2012, the Cook County State’s Attorney’s Office approved charges against two defendants in this incident which the investigation revealed was an apparent drug deal set at a random location.

Michael Reed, age 21, with a last known address of 518 Chase Street, Park Forest (currently a vacant home, according to police), was charged with first degree murder.