CALIFORNIA–(ENEWSPF)–December 13, 2011. It’s time to put nurses in the Hall of Fame. For the 12th time in 13 years, nurses have earned top honors in the annual Gallup poll on ethics and honesty.

The Gallup organization does a yearly survey asking Americans to rate “the honesty and ethical standards” of various professions. 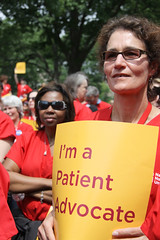 The Gallup Poll findings may be viewed here.

“Nurses consistently top the list, having done so each year since they were first included in 1999,” Gallup reported Monday, including the 2011 survey. The one exception was in 2001, just after the terror attacks of September 11, when firefighters topped the list.

At 84% “very high” or “high” nurses ranked nearly 10 points better than the next highest profession, pharmacists. Bringing up the rear were members of Congress, lobbyists, car salespeople, and telemarketers, all bottoming out at just 7 percent.

“We hold that trust as a sacred bond with our patients and our communities,” said Karen Higgins, RN, co-president of National Nurses United, the nation’s largest union and professional association of registered nurses.

“Patients and their families expect nurses to fight for them at the bedside, even when it conflicts with the profit motive of far too many hospital managers, insurance companies, and others in the healthcare industry who put the bottom line above patient interest,” said Higgins.

“For nurses, that obligation also goes beyond the bedside,” said Higgins citing the year long NNU campaign for “sweeping changes to heal our communities and nation, with a program for a Main Street Contract for America premised on jobs with dignity, healthcare for all, a safe environment, and support for public education. And we have said Wall Street banks and other financial firms who created the current pain and suffering in our communities should pay for it with a small tax on financial transactions.”

NNU plans to continue that campaign in the coming year.