Bill Maher: The Magic Republican (R) Allows Them to Get Away with Anything 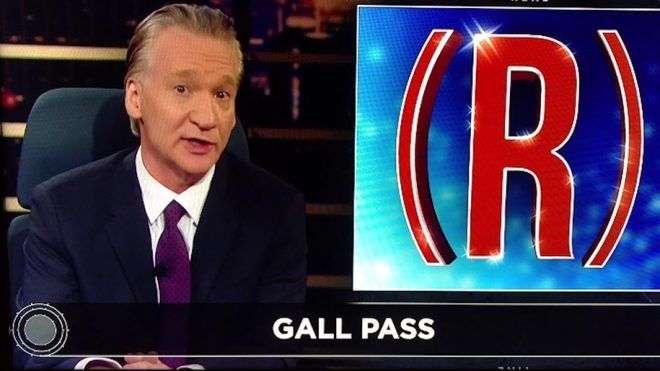 Bill Maher’s New Rules segment was exceptional this Friday. He called out Trump and the Republicans in general for doing things no Democrat would get away with using examples in the mode of Jon Stewart.

Bill Maher noted in this sad but hilarious excerpted video, that having the Republican (R) next to any politician’s name seem to provide immunity from bad behavior, unpatriotism, and much more.

“Someone has to tell me what’s magic about a capital R,” Bill Maher said. “the kind that goes after your name if you are a Republican. Because if you have one of those, you can get away with pretty much anything when it comes to selling out, cursing out, or compromising your own country. When it was Hillary Clinton with an unsecured email server, Republicans wanted to ‘lock her up. But President Trump still uses the unsecured Android phone he had before he was elected. And he has been warned that with an old consumer grade phone like that someone could easily hack into his Twitter account and start posting crazy messages. And how would we be able to tell?”

“So a couple of weeks before the Super Bowl,” Maher continued. “Bill O’Reilly asked Trump why he always defended Putin who O’Reilly said was a killer. But again, Trump took Putin’s side over America saying, ‘We’ve got killers here too. You think our country is so innocent?’ If a Democrat said that before the Super Bowl, they would be in Guantanamo Bay by halftime. Same as they would if they did this.”

Bill then showed the picture of Trump in an unsecured location discussing the response to North Korea’s missile launch with the Japanese prime minister and staff.

“But if you have the magic (R),” Bill said. “No problem. Trump repeatedly said he was going to donate to military charities. Then didn’t. Then lied about it. He compared our intelligence agencies to Nazis. He said McCain who spent five years in a Vietnamese prison wasn’t a war hero because ‘I like people who weren’t captured.”

“I have got to say to all you flag waving Right Wingers who always say, ‘I am not just going to stand here and let you run down America,” Maher said. “You are standing there and letting Trump run down America. Donald Trump would go to the Tomb of the Unknown Soldiers and say, ‘Maybe if he had done something he wouldn’t be so unknown.’ Republicans would be okay with that too.”

“When Trump said I could stand in the middle of Fifth Avenue and shoot somebody and I wouldn’t lose voters, “Maher continued. “He wasn’t making a joke. He has never made a joke. No. He was simply stating an actual fact for once which is if you have the magic (R) after your name, you can drive a Hummer through a day care center and Fox News would say the babies were asking for it.”

“Meanwhile,” said Maher. “In the Alternative Universe, where a Democrat is President, Obama once said, ‘We have not been perfect.’ And for eight years Republicans screamed he was on a non-stop apology tour. They lost their s$it whenever there was a picture of him committing high crimes like not having his hand over his heart during a song. Or saluting with coffee in his hand even though this guy did it with a dog.”

“Yeah, that guy,” Maher said. “The one who sat frozen for seven minutes after being told the country is under attack. And we all just accept this. America is the Republican Party’s bitch. And they can criticize and betray her but you can’t.”

Maher pointed out that even though President Obama talked up the troops, talked up the country, and praised the only country where his story would have been possible, Conservatives still questioned his love for America. Maher reminded America of surfaced information that candidate Nixon, a Republican, worked with a foreign government that likely delayed the end of the Vietnam War to have it as an election issue when President Johnson was trying to end the war. Republicans did not blink.

“Dick Chaney once outed a CIA agent,” Bill said. “Reagan sold weapons to Iran a country they all want to bomb now. … And instead of being impeached he was elevated to sainthood. Why do Republicans get away with this? Why do they have patriotic immunity? America is like a dysfunctional family. The Democrats, are the older mature son who works hard and does everything right but somehow it is never good enough. And the Republicans are the young a$$hole son who is a f$ckup and it doesn’t matter how many times he crashes the Camaro, daddy buys him a new one. All of America’s intelligence agencies say a foreign power tampered with our election to favor the Republican. And they say also that they don’t trust that Republican — our president with our state secrets. And yet the theme of Trump’s inaugural was America First. Please. His ego is first, his hotels are second, Russia is third. I would be surprised if America made the top ten.”