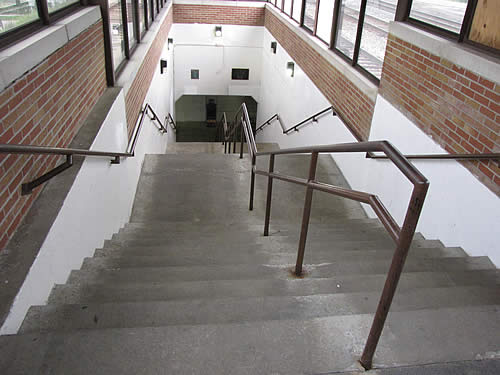 The only passage to the train platform at the Matteson station involves climbing three steep sets of stairs. (Photo: Gary Kopycinski)

To the Metra Board of Directors: would you make your grandmother walk up these steps?

I know many of our elderly residents are fit, but, really, these steps are a haul for the most fit among us. If

And they’ve been here for years, at the Matteson Station on the Electric Line.

Funny story: for years, also, there was an ADA accessible ramp on the Park Forest side of the tracks. It was good for parking bicycles and for those who wanted to warm up for the three teirs of steps within. For anyone with accessiblity issues, the ramp was a cruel joke. Once inside the station, they found no stairway to heaven.

To the Metra Board of Directors, isn’t it about time some attention was given to this station for those among us who are unable to ascend these three flights? 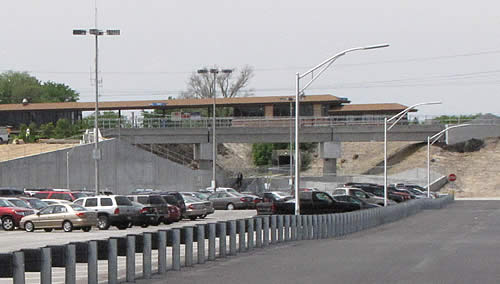 The newsly-remodeled east side of the tracks, courtesy Canadian National Railroad, sports a wonderful ADA accessible ramp. The ramp, however, leads to the same dark tunnel, and then, those stairs.

Park Forest Mayor John Ostenburg is more diplomatic in his assessment of the station, "Although the new exterior entranceway to the Matteson Metra station on the Park Forest side has a ramp that makes access easy, users of the station need to be reminded that the station itself is not easily accessible because of the steep steps and the lack of an elevator. The interior of the station is the responsiblity of Metra, not the Village of Park Forest. Those who have difficulty with steps should opt for use of the 211th Street Station, which does have an elevator."

An invitation to the Metra Board from eNews Park Forest: Come! Tour the station with us! And be part of the solution.

The writer is a member of the Park Forest Village Board. The views expressed here, however, are his own.