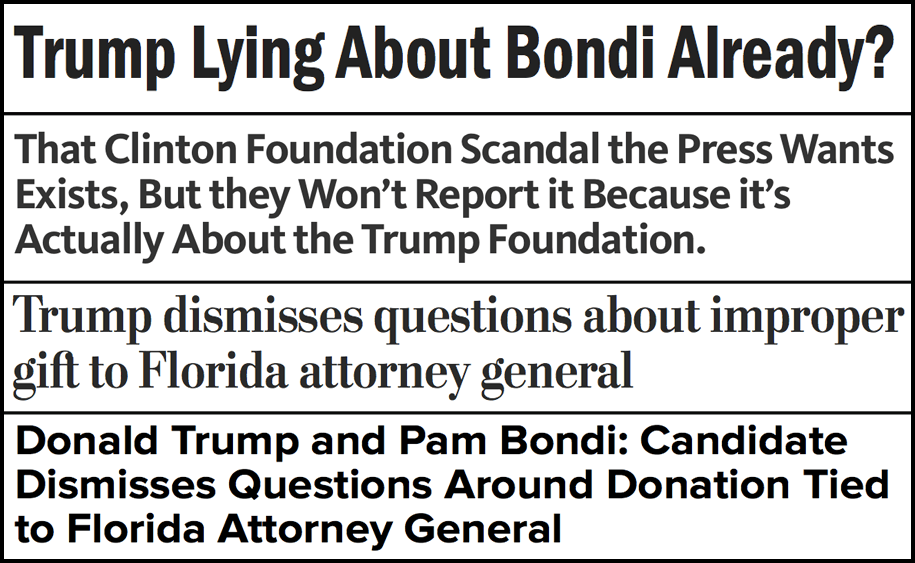 We begin today’s roundup with Paul Waldman at The Washington Post who details Donald Trump’s history of corruption:

In the heat of a presidential campaign, you’d think that a story about one party’s nominee giving a large contribution to a state attorney general who promptly shut down an inquiry into that nominee’s scam “university” would be enormous news. But we continue to hear almost nothing about what happened between Donald Trump and Florida attorney general Pam Bondi. […]

there was only one mention of this story on any of the five Sunday shows, when John Dickerson asked Chris Christie about it on “Face the Nation“ (Christie took great umbrage: “I can’t believe, John, that anyone would insult Pam Bondi that way”). And the comparison with stories about Hillary Clinton’s emails or the Clinton Foundation is extremely instructive. Whenever we get some new development in any of those Clinton stories, you see blanket coverage — every cable network, every network news program, every newspaper investigates it at length. And even when the new information serves to exonerate Clinton rather than implicate her in wrongdoing, the coverage still emphasizes that the whole thing just “raises questions” about her integrity. […]

[F]or all the controversy he has caused and all the unflattering stories in the press about him, Trump is still being let off the hook.

Jose DelReal and David Fahrenthold at The Washington Post:

Trump’s latest assertion that he had not spoken to Bondi about Trump University revived questions about why the New York real estate developer would have donated to the Florida attorney general.

Trump has bragged about making political donations to politicians to curry favor with them and benefit his businesses, regularly using such statements to undermine his critics in both parties.

Over at TPM, Josh Marshall dives more into the Bondi story and highlights reporting by Sopan Deb on Trump’s lies:

Who knows? But according to multiple reports, well before this became a big story and never denied by Trump, Pam Bondi personally solicited the contribution from Trump.

Here’s an interesting analysis by Will Weaton:

Whether that was through deliberate intent or incompetence is immaterial, because this is an actual, real, meaningful scandal with two — two! — smoking guns. This is exactly the sort of thing that the New York Times, CNN, and all the biggest names in journalism are looking for as they relentlessly go after the Clinton Foundation, as well as Bill and Hillary Clinton.

There is nothing to be uncovered there, because there is no “there” there. … but there is almost complete and utter silence about Trump’s two successful efforts to buy off politicians — and not just politicians, but the Attorneys General of two different states! […]

The story the media wants to write about the Clintons exists, but it looks more and more like it won’t be written, because it’s about Trump. I don’t think this is because the media is in the tank for either candidate, but is because there is a narrative: Trump’s a buffoon and dog bites man, while Clintons are just so damn suspicious and there’s a cloud over everything they do and whether it’s actually questionable or not, it sure has the appearance of being unethical.

During the primary debates, Donald Trump repeatedly boasted that he knows how to get politicians to do his bidding, explaining that he donated to both Republicans and Democrats, just in case he needed a favor. “You know what? When I need something from them, two years later, three years later, I call them, and they are there for me,” he said. “And that’s a broken system.”

Yet now that Trump is facing questions about whether his improper $25,000 donation to a group connected to Florida Attorney General Pam Bondi prompted her to drop a potential fraud investigation against Trump University, he’s suggesting that he wasn’t actually very good at working the system – and contradicting Bondi herself.

Douglas Berry at The Oregonian points out media bias in the coverage of the candidate’s charities:

“If it looks like a bribe and quacks like a bribe, I think it’s a bribe,” a lawyer who filed an ethics complaint against Bondi told the Orlando Sentinel in June.

Should that quacking sound outrage the public? Among the press, the Washington Post’s David Fahrenthold has been mostly alone in chasing it. (He’s also found “no evidence” that any of Trump’s money has gone into the charitable foundation that bears his name. And that Trump has a long history of very publicly promising personal charitable gifts and then either not following through at all or getting someone else to pay up for him.)

The Clinton Foundation, on the other hand, earned a rare “A” grade from the independent watchdog group CharityWatch.

The bribery story is bad enough, but when coupled with Donald Trump’s refusal to releases his tax returns, it looks even worse. And now, Trump claims that “people don’t care” about his tax returns:

“I think people don’t care,” Trump said Monday afternoon in Ohio of his tax returns, which he has not released. “I don’t think anybody cares, except some members of the press.”

Trump said he’s provided the “most extensive financial review of anybody in the history of politics” and because he’s under a “routine audit,” he’s not able to make his tax returns public.

Yeah, right. When will the media stop giving Trump a pass on this stuff? Because if Clinton had refused to release her tax returns…well, you can imagine what those headlines would be.