Tinley Park, IL-(ENEWSPF)- If “a picture is worth a thousand words,” then perhaps a well-placed billboard is worth a hundred public events. That is the reasoning behind a new marketing effort launched this week by the SouthWest InterFaith Team (SWIFT), a 15-year-old collaboration among 18 area churches, synagogues and mosques in the Chicago Southland.

Inspired at least in part by last year’s award-winning film Three Billboards Outside Ebbing, Missouri, SWIFT for the first time is sponsoring a billboard on Interstate 80/294, at the junction Halsted Street in Hazel Crest. Outfront Media, which owns the billboard, estimates that it is seen by more than 360,000 drivers per week.

SWIFT’s primary focus is spreading peace and understanding, and the group hopes to spread this message to thousands and thousands of viewers with this outreach.

“In these challenging times, we felt this was a good way to spread the healthy message of our group to a wider audience,” says Ernie Ratowitz, SWIFT’s Jewish co-chair, and a member of the Shir Tikvah (Song of Hope) congregation in Homewood. “We are all friends here at SWIFT and we all get along. So we just wanted to remind the general public that there is much more that unites us than separates us.”

Indeed, that message goes to the very heart of the group, which was started informally after 9/11, but became an official entity in 2003. The organization now boasts 18 member groups, including two Jewish congregations, four Muslim prayer centers and a dozen Christian entities of varying denominations, including Catholic, Methodist, Episcopalian, etc.

“For over 15 years, SWIFT has been working towards the commonality of the three faiths,” explains attorney Mohammed Nofal, the group’s Muslim co-chair and a member of the Prayer Center of Orland Park. “While we highlight our similarities, we also celebrate our differences. God made us of different faiths, colors, and religions — so that we may learn and understand one another. This (billboard) is the next chapter of our story.”

Adds Christian co-chair Sr. Marilyn Renninger of the Franciscan Sisters of the Sacred Heart in Frankfort: “This billboard will help spread the good that our group is doing in this area. SWIFT has been and is a gift for many people. At our forums, dinners, and annual awards ceremonies, we have people of different faiths working together on volunteer projects, and that has opened hearts and minds to love, understanding and respect.”

Indeed, that quiet success story has been ongoing in the South Suburbs for nearly 16 years now. What started after 9/11 as a donation from a mosque in Frankfort to a food pantry at a Tinley Park church has continued to grow and nurture fellowship through community service projects and interfaith forums for the public on a wide variety of topics, such as Social Justice, Science & Religion, and this month’s focus on the roles of “Women in Our Faiths.” 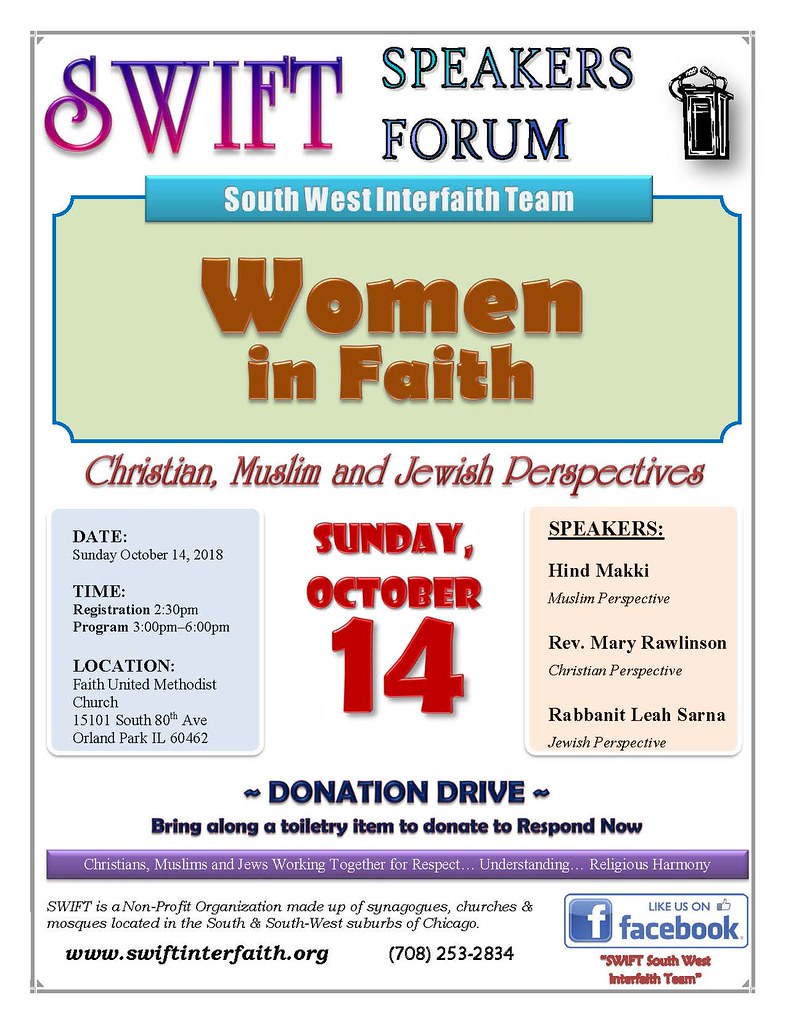 “SWIFT remains relevant, active and determined, acting a beacon of hope in this otherwise chaotic and divided world,” says SWIFT co-founder and former Khalid Mozaffar, a member of American Islamic Association in Frankfort. “This group offers a vibrant testament to the fact that People of Faith can be a positive, unifying, functional force in modern-day society. And that counters the false argument that Religion and its followers sew only hatred and division in our troubled world.” Through the billboard, he adds, SWIFT now aims to take its message of hope and harmony to a broader audience. “We want SWIFT to be that everlasting lighthouse and a beacon for many future generations,” adds Mozaffar.

For more about SWIFT and to view videos of prior events, please visit the SWIFT Interfaith Facebook page, or go to SWIFTinterfaith.org.