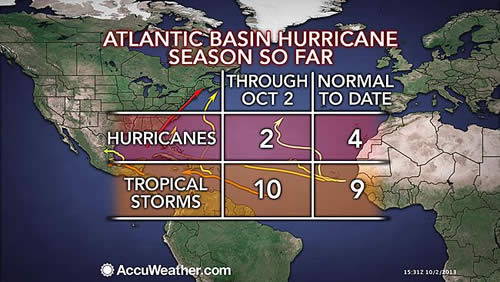 State College, PA-(ENEWSPF)- AccuWeather.com reports with only two hurricanes so far, the 2013 Atlantic hurricane season is well behind the curve to reach the average number of hurricanes and is one of the least intense since 1950.

While the season does not end until late November, time is running out for the season, much to the relief of those living in coastal areas.

By the end of November, on average there are about 12 tropical storms and six hurricanes per season. With approximately two months to go, the season will likely finish with an above-average number of tropical storms. There have already been 10 tropical storms as of Tuesday morning, Oct. 2, 2013.

There have been other years where the season delivered two or fewer hurricanes the entire season. However, most of these were prior to the satellite era, and the accuracy of this data is considered to be questionable.

This season so far and 1982 and are the only years, since weather satellites were launched in the early 1960s, in which there were only two hurricanes.

The ACE (Accumulated Cyclone Energy) index is a way to measure the intensity of individual tropical storms and hurricanes, as well as entire hurricane seasons. The index measures the maximum sustained winds of every storm. The higher the ACE index number, the more intense the storm and the more active the season.

Comparatively, Super Typhoon Usagi in the Western Pacific earlier this season alone with an ACE index of just shy of 24 has nearly equaled the entire 2013 Atlantic season combined.

Forecast for the Remainder of the Season
According to AccuWeather.com Hurricane Expert Dan Kottlowski, “We continue to see the same limiting factors from early in the season continuing over the heart of the tropical Atlantic basin: Disruptive winds about 30,000 to 40,000 feet above the sea surface and a wedge of dry air near the sea surface.”

Occasionally, these winds back off and where this coincides with a pocket of moisture, warm water and a disturbance, suddenly conditions are much more favorable for development.

The areas over the Caribbean and the Gulf of Mexico are likely to remain hot spots for the rest of the season, along with off the Southeast coast of the United States in western Atlantic. The Caribbean and Gulf have been the birthing areas for six organized systems ranging from one tropical depression to four tropical storms to Hurricane Ingrid.

“We are monitoring an area in the northwest Caribbean this week, Kottlowski said, “This feature has a chance of becoming the next tropical depression or Tropical Storm Karen by the end of the week as it enters the central Gulf of Mexico.”

Regardless of the strength of the Gulf of Mexico system, it will help to send rain into the upper Gulf Coast, into part of the interior South and perhaps farther north along the Atlantic Seaboard spanning late this week into early next week.

While most tropical systems in the Atlantic thus far this season have been on the low end of the intensity scale, tropical storms have caused loss of life and great damage in Mexico.

It only takes one strike from a tropical storm or hurricane to headline a season in the United States.