Washington, DC–(ENEWSPF)–December 22, 2014.  Stunning aerial photographs of certified organic farms taken in an investigation launched by The Cornucopia Institute reveal industrial-scale operations housing thousands of animals in cramped conditions with no access to the outdoors. Access to pasture for ruminants like dairy cows is required under National Organic Program (NOP) regulations, and all livestock certified organic must have a means of reaching the outdoors year-round. “The vast majority of these massive, industrial-scale facilities, some managing 10,000-20,000 head of cattle, and upwards of 1 million laying hens, had 100% of their animals confined in giant buildings or feedlots,” said Mark Kastel, Senior Farm Policy Analyst at the Wisconsin-based Cornucopia Institute, which has filed a legal complaint against 14 livestock operations it alleges are illegally marketing themselves as organic. 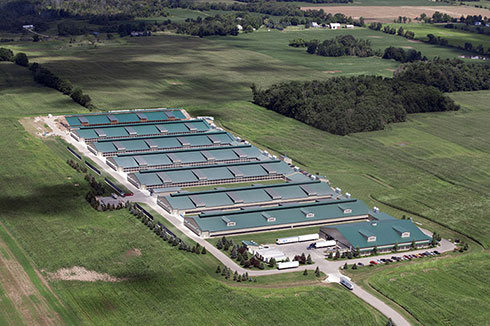 It is important to note that not all organic farms house their animals in conditions seen in the aerial photographs. “Many of our dairy farmer-members have animals, they truly care for, that have names, not numbers,” Kastel explained. However, environmental and consumer groups have been sounding an alarm over the increased dependency many larger industry-owned farms have developed on synthetic inputs temporarily allowed in organic production. These practices undermine the values and the integrity that consumers come to expect from the organic label.

One such synthetic chemical is methionine, an essential amino acid that living beings can only receive through food, but is produced in chemical plants with inputs such as methyl mercaptan, which recently poisoned four DuPont workers. Many large-scale organic poultry producers have come to rely on the input rather than provide adequate access to pasture that allows poultry to receive this nutrient through insects and worms. In 2002, the NOP permitted a “porched-poultry” loophole that essentially allows a small porch to be considered access to the outdoors. “Quite frankly, even if Miles McEvoy, who currently directs the NOP, believes that a porch, with a floor, ceiling and screened walls, constitutes ‘the outdoors,’ if only 5% of the birds have access or can fit in that space, then 95% of the others are being illegally confined,” Cornucopia’s Kastel stated. In 2011, the National Organic Standards Board submitted a formal recommendation to NOP which included the requirement that poultry operations “establish and maintain poultry living conditions that accommodate health and natural behavior,” and set minimum space for birds, and standards regarding outdoor access areas. Despite a unanimous vote by the NOSB, NOP has yet to act and adopt formal rules carrying out the Board’s request.

Moreover, recent changes to NOP rules reflect the growing influence of large corporations that have bought-up and consolidated small organic companies. Late last year the NOP head Miles McEvoy disallowed the NOSB from setting its own work plan and agenda, and mistakenly re-categorized the Board as time-limited, despite its permanent independent authority established by the Organic Foods Production Act. Although, in response to a petition by Beyond Pesticides, Center for Food Safety, and other organic farm and consumer groups, the NOP agreed to change the charter to reflect the permanence of the Board, it continued to limit the Board’s ability to define its own agenda.

NOP also changed procedures for “sunsetting” synthetics allowed in organic production, which are determined by NOSB. Previously, a two-thirds majority of the NOSB was required to continue the allowance synthetic material after a five year period. Now, NOP rules require a two-thirds majority to remove a synthetic substance. If this rule had been changed earlier, NOSB would not have had to votes to, for instance, remove the uses of antibiotics in apple and pear production, a change hailed by many farmers, consumers and environment and health advocates. NOP made these changes without any prior notice, consultation, or public comment period.

“The current situation, applauded by the industry’s most financially powerful interests, and almost universally condemned by nonprofits representing farmers and consumers, is untenable,” said Jay Feldman, Executive Director of Beyond Pesticides and a current Obama administration appointee to the 15-member NOSB. “Someone needs to take responsibility for the divide in this industry which has begun seriously undercutting the credibility of the organic label and the livelihoods of ethical organic farmers.” 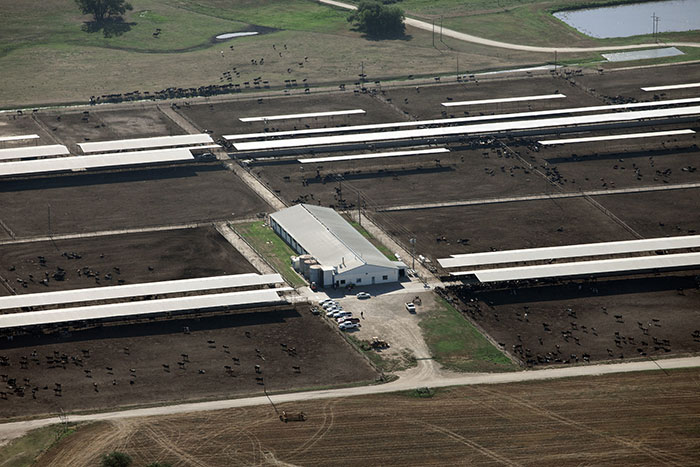 As the aerial photographs taken by Cornucopia show (view them all here), there is a significant risk with changes that raise the bar to remove unnecessary synthetics. Rather than creating a systems approach, these changes create a dangerous dependency on unethical practices that compromise the quality of organic food, the environmental and local communities surrounding these factory farms, and consumer’s expectation of the organic food label. While Aurora Organic Dairy, one of the dairy farms pictured, told the Washington Post that ”A single photo doesn’t really tell us anything about a farm and its practices,” a picture speaks a thousand words, consumers are certainly reading the message. As organic continues to grow, it is critical that factory farms and confined animal feeding operations (CAFOs) not become the norm, as this risks a slide towards conventional practices and damages the high bar that many responsible organic producers work day and night to achieve for their customers.

Organic agriculture, from the outset, is the only system of food production that is subject to independent public review and oversight, working to assure consumers that toxic, hazardous synthetic pesticides used in conventional agriculture are replaced by management practices focused on soil biology, biodiversity, and plant health. This eliminates commonly used toxic chemicals in the production and processing of food that is not labeled organic –pesticides that contaminate our water and air, hurt biodiversity, harm farm workers, and kill bees, birds, fish and other wildlife.

Consumers and responsible organic farmers must stand up for organic integrity and take action to fight changes instituted by the National Organic Program. To aid this effort, Beyond Pesticides has created the Save Our Organic campaign, aimed at protecting the independent authority of the NOSB and re-instilling public trust in the label. Concerned organic consumers can also stay up to date on the latest actions of the National Organic Standards Board (NOSB) by following Beyond Pesticides’ Keeping Organic Strong page, which tracks issues before the Board and open to public comment.