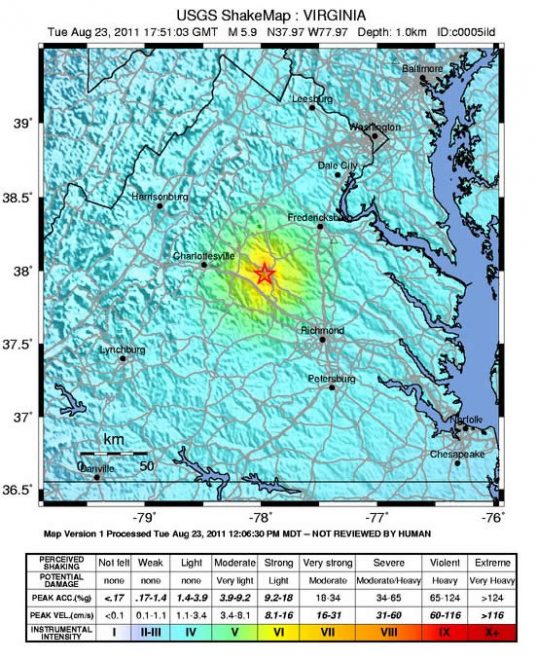 Washington, DC—(ENWESPF)—August 23, 2011. The U.S. Geological Survey has reported that a magnitude 5.8 earthquake struck near Washington, DC. The epicenter was located in Mineral, Virginia.

The quake was felt in Pennsylvania, New York, North Carolina, Ohio and on Martha’s Vineyard where President Obama is vacationing.

CNN’s business correspondent Alison Kosik reported that at 2:20 p.m. EDT traders in the New York Stock Exchange felt the shaking and shouted to each other, “Keep trading!”

CNN has also reported that the Pentagon has been evacuated,”When the building began shaking rather violently, hundreds of people began streaming out,” CNN’s Barbara Starr said, “because many people thought that the building was under attack.” Starr was standing in the Pentagon’s press office when the roof started to shake.

The U.S. Capitol was also evacuated.

CBS news reports that people from across the U.S. Eastern Seaboard and from Ontario to the New Brunswick tweeted that they felt the ground move when the temblor struck at 1:51 p.m. ET.

Two nuclear reactors near the epicentre in Virginia were taken offline as a precaution. No damage was reported.

A pair of government buildings in downtown Sudbury, Ont., were evacuated after they began shaking.

City officials say they were cleared out in order to check for any damage.