Federal documents show that speculators blanketed Gold Butte and Basin and Range national monuments with requests to have nearly 640,000 acres offered for oil and gas leasing — and hard-rock mining claims — in the years before they were designated by President Obama.

“Oil industry speculators can’t wait to get their dirty hands on these incredible national treasures,” said Patrick Donnelly, the Center’s Nevada state director. “To even consider removing protections from Gold Butte and Basin and Range to appease oil companies is the epitome of short-sighted, corrupt public policy. Trump is trying to auction off public lands like they’re part of his crumbling real estate empire, without any regard for these amazing cultural and natural resources.”

National monuments protect irreplaceable biological, historic and scientific features from activities that would damage them, such as fossil fuel development.

More than half of Basin and Range National Monument — at least 410,493 acres out of the total 704,000 acres — have been nominated by the oil and gas industry to be offered for leasing, according to Bureau of Land Management records. Six hard-rock mining claims also could be developed if the monuments are eliminated. This central Nevada monument protects 13,000 years of culture, including a treasure trove of prehistoric rock art.

At Gold Butte National Monument, oil and gas speculators have asked BLM to offer at least 226,748 acres for leasing — more than three-fourths of the monument’s 296,937 acres. Another 24 hard-rock mining claims, including four targeting uranium deposits, could be developed if monument protections are lifted. This southeastern Nevada monument is an important wildlife corridor and critical habitat for the Mojave desert tortoise

In April, Trump ordered Interior Secretary Ryan Zinke to “review” 27 national monuments and issue his recommendations by Aug. 24. Zinke has since pardoned six monuments without releasing any information about how these decisions were made.

Trump and Zinke are trying to expand fossil fuel and other energy-related extraction on public lands. Despite the extensive parcel nominations, fracking remains speculative on public lands in Nevada. According to BLM data, only 2.4 percent of acres leased for oil and gas are actually producing.

The Nevada leasing requests were made between 2014 and the date of each monument’s designation. Obama designated Basin and Range as a national monument in 2015 and Gold Butte in 2016. The designations protect rare cultural and ecological landmarks, biodiversity, landscapes and geology, and world-renowned prehistoric sites that could be ruined by oil, gas or mining industrialization.

A summary of the Center’s analysis methods is available to media upon request.

Download a map of one-mile sections containing oil and gas nominated parcels in Basin and Range National Monument here and its proclamation here. 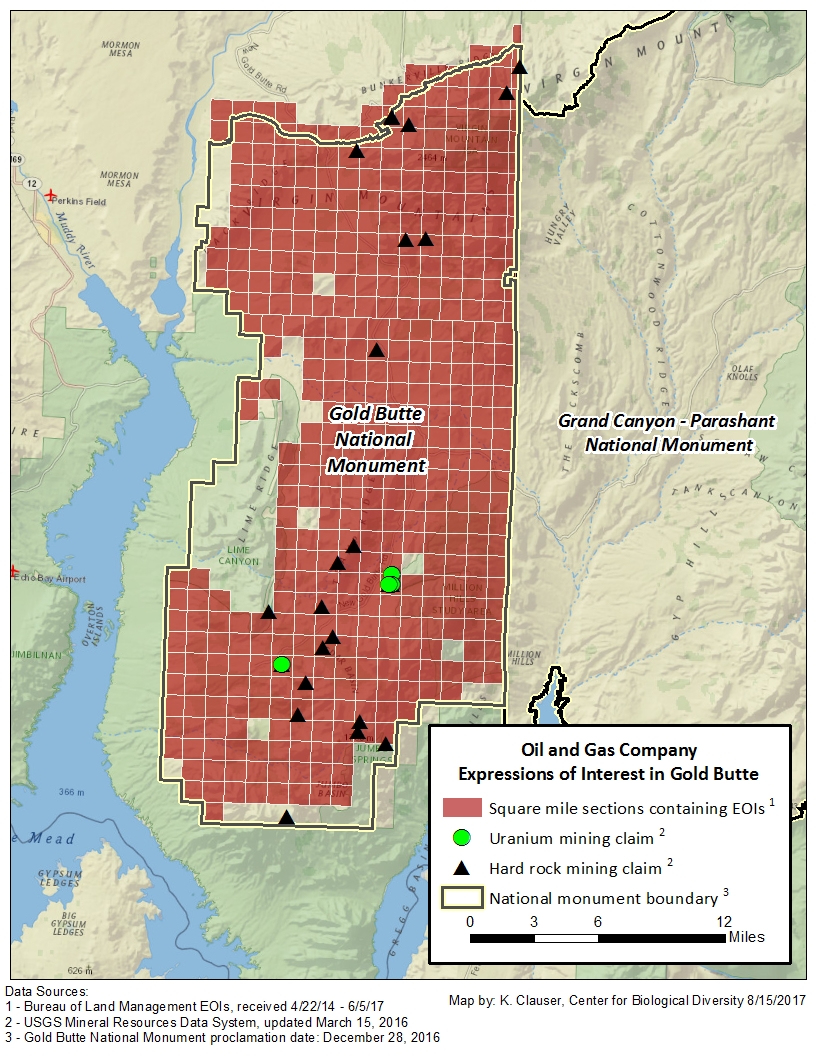 The Center for Biological Diversity is a national, nonprofit conservation organization with more than 1.3 million members and online activists dedicated to the protection of endangered species and wild places.