Washington, DC–(ENEWSPF)–September 3, 2013.  Corn genetically engineered (GE) with the Bacillus thuringiensis (Bt) toxin to kill corn rootworm has been widely reported to exhibit resistance for the past several years. A new report by University of Illinois researchers found the resistant corn rootworm in two of the state’s counties significantly damaged by western corn rootworm. The increasing lack of efficacy of GE corn, developed with the claim that it is specifically designed to protect corn from rootworm, calls into question the efforts of agrichemical companies to patent new forms of GE crops. 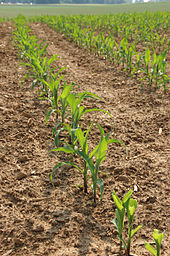 The report by Joe Spencer, PhD, and Michael Gray, PhD, identifies significant damage from western corn rootworms in farm field that were planted with GE corn that contain a Bt protein referred to as “Cry3Bb1,” which has been inserted into nearly one-third of the corn planted in the United States. This version of Bt corn was introduced by Monsanto in 2003, and was touted as a way to reduce insecticide use against rootworm pests. Evidence was gathered in two Illinois counties, Livingston and Kankakee, after fields that had severe root pruning and lodging were brought to the attention of Drs. Spencer and Gray. Dr. Gray was quoted in a Reuters article stating,”Farmers across ‘a wide swath of Illinois’ could face formidable challenges protecting corn crops.”

Even more problematic is that western corn rootworms also appear to be resistant to crop rotation. The crop damage was found in fields where the GE corn had been planted in a rotation following soybeans. Rootworms were also collected in the adjacent soybean fields. The report found the number of adult rootworm beetles in the soybean field was reminiscent of densities in the late 1990′s and early 2000′s. According to Dr. Spencer, “It looked like continuous corn and use of the same trait year after year is what produced resistant beetles. Growers thought their get-out-of-jail-free card was just to rotate to soybeans. But what we’re seeing in northeast and east-central Illinois are beetles that are also resistant to crop rotation.”

Corn rootworm resistance to Bt corn has been widely reported for the past several years. A January 17, 2013  release from the Environmental Protection Agency (EPA) concluded that “corn rootworm may not be completely controlled by Cry3Bb1 in certain parts of the corn belt.” In 2011, entomologists at Iowa State University published a study verifying the first field-evolved resistance of corn rootworm to a Bt toxin. The researchers documented resistance to the Bt toxin Cry3Bb1. The study found the western rootworm’s ability to adapt was strongest in fields where Bt corn was planted for three consecutive years and suggested that insufficient planting of refuges may have contributed to the resistance. This study was cited by a group of 22 prominent entomologists who submitted formal comments to the EPA on their concerns of the viability of Cry3Bb1 corn. Recent research also shows that the cultivation of Bt corn has negative impacts on beneficial soil life.

In their report, Drs. Gray and Spencer recommend that, “Producers in the most severely affected areas (central and east central) of Illinois should consider the use of pyramided Bt hybrids (hybrids expressing more than one rootworm Cry protein) in 2014.” However, pyramided or stacked GE corn varieties have also been shown to be ineffective. A University of Arizona College of Agriculture and Life Sciences study, published in the Journal PNAS, found that insects that were bred to be resistant to one form of Bt toxin were often cross-resistant to other forms of Bt toxin.

As insects and weeds become resistant to GE crops and the herbicides the crops are engineered to resist, agrichemical companies are working to introduce a new generation of GE crops. The St. Louis Pots-Dispatch reported in 2012 on progress that multinational chemical corporations Dow AgroSciences, BASF, and Monsanto are making to bring multi-herbicide resistant varieties to market. Under separate arrangements with each company, Monsanto adds glyphosate resistance to seeds that are simultaneously engineered to resist other herbicides. In October 2012, Dow AgroSciences obtained a global patent on its Enlist Duo technology, which packages an herbicide containing 2, 4-D and glyphosate with seeds engineered to tolerate both materials. Monsanto has also been partnering with BASF on dicamba and glyphosate tolerant crop varieties since 2009 with a focus on soybeans, cotton, and corn.

The report by Drs. Gray and Spencer, though important for showing increased rootworm resistance to Bt corn, makes unsustainable recommendations to farmers that they use pyramided Bt hybrids or “planting-time soil insecticides” to reduce western corn rootworm in 2014. A sustainable solution to rootworm resistance is the transition to organic agriculture. Organic agriculture is an ecologically-based management system that prioritizes cultural, biological, and mechanical production practices and natural inputs by strengthening on-farm resources, such as soil fertility, pasture and biodiversity. For more reasons to support organic agriculture, visit Beyond Pesticides’ Why Organic page.