Washington, DC–(ENEWSPF)–September 3, 2015. A study published this week reveals that ants are a cheaper, more effective means to managing pests than toxic chemical pesticides. The review was conducted by Aarhus University’s Joachim Offenberg, Ph.D., a plant and insect ecologist who has studied ants for over 20 years. His review focuses on Oecophylla smaragina and O. longinoda, commonly referred to as weaver ants, and their beneficial effects on various crops in Africa, Southeast Asia, and Australia. In this review, Dr. Offenberg finds weaver ants to be as or more effective than synthetic pesticides for pest management in a variety of cropping systems. This evidence brings renewed vigor to the argument that natural, biological pest management can act as a viable alternative to the use of toxic pesticides that endanger health and the environment. 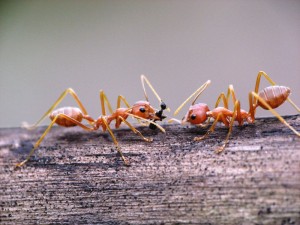 Weaver ants, often found in tropical climates, are tree-dwelling ants with characteristics that are ideal for biological pest management. They are categorized as a “superorganism,” meaning the colony itself is like an  organism, with individual ants acting as “cells” that can move around independently. Dr. Offenberg sees this as a strength because the colony is able to prey on targets much larger and stronger than itself.

He explains, “Most ant species…deploy a wide range of prey types. They may exert pressure on several pest species and life stages; small workers may handle eggs, whereas larger workers may engage larger sized individuals. On top of this, their territorial behaviour makes them attack and deter pests that are far beyond the size of potential prey.”

And they are quick to respond to intruders. The basis for this ability is an ant colony’s recruitment system, which is used to bring nestmates to some point in space where work is required, or prey is present. This is done based on trail-laying, tandem running and alarm pheromones. Consequently, they can bring large numbers of ants to respond when pest populations escalate. Recruitment behavior can, moreover, be utilized to attract ants to focal points where their services are most needed. This type of behavior can be lethal to unwanted agricultural pests.

Dr. Offenberg suggests that utilizing weaver ant colonies as pest control is more cost-effective than pesticide use. He notes that the heftiest investment when managing an ant colony is the time spent up front. Building a colony can be tedious work, but worthwhile in the end. After transplanting a colony onto one’s farm, farmers can increase the quantity and quality of the ants in a few ways:

Once established, ant colonies can thrive without aid for extended periods of time. Ants are able to store protein in the form of trophic eggs and brood that may be cannibalized, making their colonies stable and a predictable service with low management costs. One study showed that colonies of Temnothorax rugatulus survived 8 months without food. This behavior also means that colonies show high prey satiation levels. At high prey densities, ants continue to forage beyond the limits of other arthropods, as they may utilize prey to build up populations of larvae and trophic eggs. Thus, ants can exert continued pressure on pests even after prolonged periods with high pest densities.

Limiting or prohibiting pesticide use is generally a requirement for using weaver ants as pest control. Dr. Offenberg’s analysis shows that weaver ant pest control is comparable to even the most popular pesticides and insecticides on the market. For example, scientists studied the cashew in Ghana, and compared the use of weaver ants with two chemical insecticide treatments (cypermethrin+dimethoate and lambda-cyhalothrin) and a control treatment (water). They found pest damage was negatively correlated with the number of weaver ant nests and trees, and the two chemical treatments had <6% pest damage on shoots, panicles, and fruits, while water-sprayed control trees showed damage as high as 37.8%. The abundance of sap sucking bugs, like mosquito bugs and beetles, was more than fourfold lower in the ant and chemical treatments compared with the control treatment and, correspondingly, nut yields were significantly and more than four times higher in ant and chemical treatments. In Punjab, India it was found that mango and citrus trees with ant nests produced 18% and 20% higher yields than trees without nests in mango and citrus, respectively. Another study looked at Beninese cashews and compared weaver ants alone, weaver ants fed sugar, and weaver ants in combination with spinosad were contrasted with a control treatment. They, respectively, produced yields that were 78%, 122%, and 151% higher than the control treatment.

While these studies do not suggest that weaver ants are more effective than chemicals, they do, however, suggest that they can do the same job with added benefits and decreased risk. With Northern Australian cashews, scientists found that not only were weaver ants more efficient in controlling all major pests, but also the technology was cheaper than using chemical insecticides. Despite high costs of the weaver ant technology during the first year where ant colonies were transplanted (colonies persist for 3 years on average), the cost of the ant technology over 4 years was only 43% of the cost of using chemicals. At the same time, yields in ant plots were 49% higher, leading to an increased net income of 71%. The added benefits of ants are endless as well. Ants live in dense societies, and to combat diseases, they produce antibiotic compounds in glands or via fungal and bacterial symbionts. These compounds may end up on plant tissue and potentially protect plants against diseases. Several plant species associated with ants have shown less microbial pathogen loads and less damage inflicted by fungi and bacteria when ant partners were present compared to plants where ants were removed.

The cost of Weaver ants is lower than insecticide applications, and the difference only increases when the consolidated costs of insecticides are included as, for example, costs on human health. They are unlikely to be unique in their abilities to provide effective pest protection; many other species are likely to hold similar properties. Because ant pest management limits or restricts the use of pesticides, there is a smaller or zero chance of pesticide residue and exposure. Avoiding detrimental health effects associated with insecticides is becoming an increasing concern for consumers across the globe. A move toward organic farming is a growing trend for both farmers and consumers. Not only is the production of organic food better for human health and the environment than conventional production, emerging science reveals what organic advocates have been saying for a long time—in addition to lacking the toxic residues of conventional foods, organic food is more nutritious. The best way to avoid toxic pesticide residues is to switch to organic foods.
Visit Beyond Pesticides’ organic agriculture program page to learn more about the benefits of alternative pest management techniques.