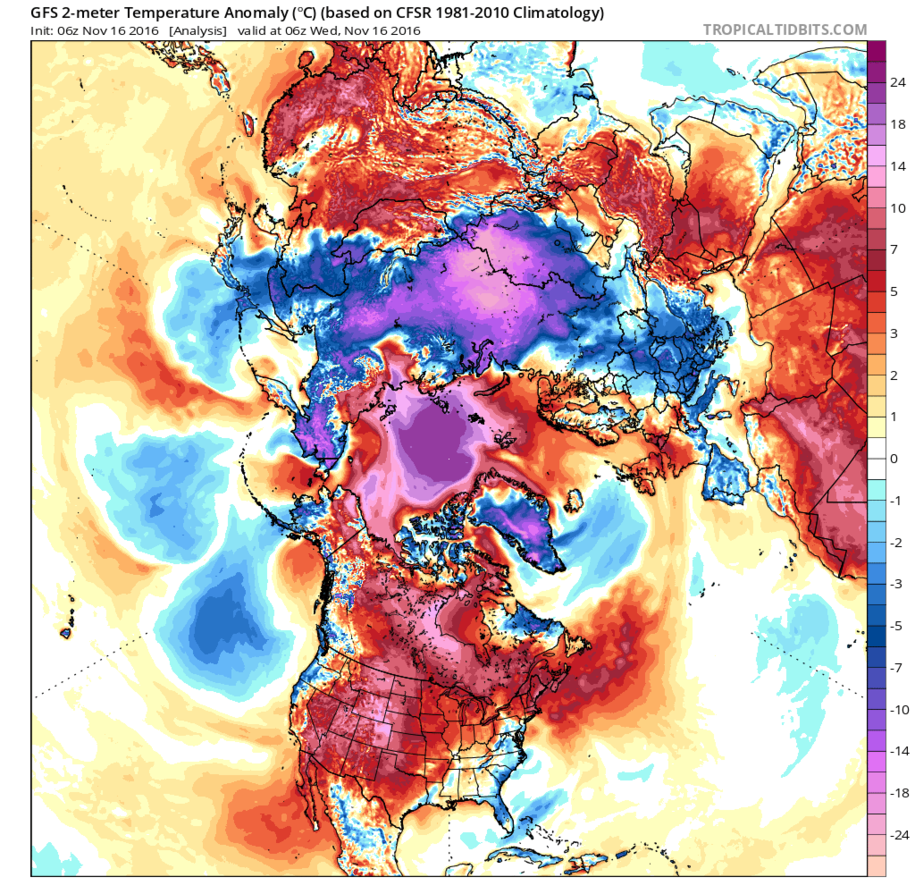 Temperatures over the Arctic ocean are as much as 50 degrees F (30 Celsius) above normal. It’s above freezing in places that are normally 20 below zero in degrees F. Arctic sea ice collapse on the Atlantic side has allowed warm storms to penetrate the central Arctic. This extreme heat is destabilizing the northern hemisphere’s atmospheric circulation all the way up to the top of the stratosphere.

Arctic sea ice extent, area and volume has collapsed to record low levels for November as warm Atlantic ocean water has pushed into Arctic seas that used to be ice covered. Sea ice cover is also low on the Pacific side. 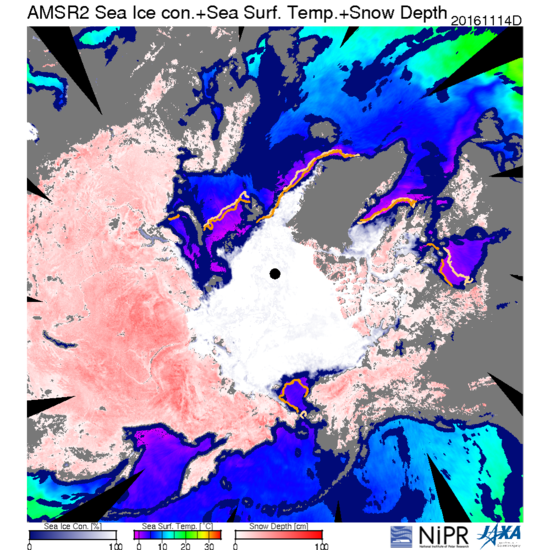 The warm Arctic sea water has allowed warm storms to inject huge amounts of heat over the north pole raising surface temperatures to above freezing in areas that are normally twenty degrees below zero Fahrenheit. Temperatures today are 50ºF above normal near the pole. 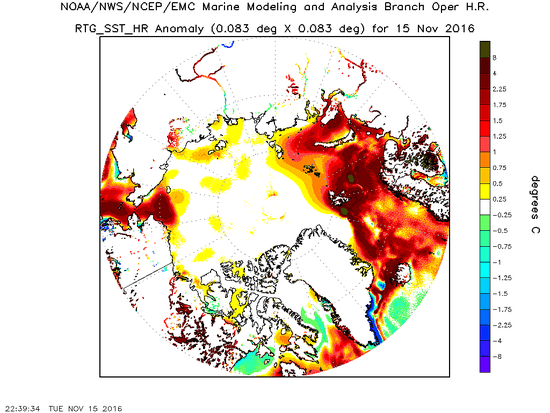 Warm water has penetrated deep into Arctic seas that used to be covered by ice.

But that’s not all. The  lack of sea ice has dramatically affected the northern hemisphere’s atmospheric circulation for months. The heat this fall has formed a warm dome over the Arctic ocean and provided moisture for deep, early Siberian snow. A record deep Siberian snow pack for October pushed south of normal developing a deep pool of cold air over central Siberia.

Snow was much deeper than normal in Siberia in October, 2016 as warm Atlantic water in normally forzen Arctic seas north of Eurasia provided an unprecedented moisture source. for Siberian snow.

The much larger than normal temperature contrasts (gradients) across Central Eurasia have intensified the polar jet stream across Asia and the north Pacific Ocean. This is a predicted consequence of intense early snowfall in Siberia associated with warm water entering the Arctic seas. This fall has had all time record minimum sea ice extent in the seas north of Eurasia and this unprecedented weather pattern is the atmospheric response to these warm waters so deep into the Arctic.

Warm water in Eurasian Arctic seas normally covered by ice has perturbed the atmospheric circulation. A dome of warm air has risen up over the warm water pushing moisture, snow, and the jet stream south over Siberia. Siberian air has been driven out over the north Pacific causing intense storms, cooling the waters of the far north Pacific, entrenching the jet stream pattern for the coming winter.

Intense atmospheric waves broke into the stratosphere from the lower atmosphere in late October, splitting the stratospheric polar vortex in two, in an unprecedented event so early in the winter season.

There may be a silver lining in this disturbing news. The strong jet stream that is locking in across the Pacific because of the cold pool that has formed under the Aleutians in response to the repeated intense cold storms is breaking down the La Niña weather pattern that would have extended the drought in California. An intense jet stream across the Pacific usually brings heavy mid-winter rains to California and the Pacific northwest.

Please note that I am a geochemist who has been involved in climate research related to nuclear waste disposal safety assessment but I am not an expert in atmospheric sciences. Because stratospheric processes involve very complex physics I must carefully review the work of experts to insure my writing is based on science, not my pet theories. In the process of reviewing recent research to support my writing I discovered the pioneering work of Dr. Judah Cohen at AER corporation. His recent blog post on the Arctic oscillation www.aer.com/… confirmed my observations and went much deeper into the subject than I can.

Much of his post is highly technical but here is the good news that rains might come to California despite NOAA’s forecast of a weak La Niña, a pattern that usually is associated with dry weather in California.

Equatorial Pacific sea surface temperatures (SSTs) continue to be weakly cooler than average (Figure 14) and most winter ENSO forecasts are for weak La Niña conditions. La Niña conditions favor a negative Pacific/North American (PNA) pattern that produces cold anomalies in the northwestern US and warm anomalies in the Southeastern US.   But the big story of late has been the rapidly cooling SSTs across the mid-latitudes of the North Pacific.  These cool waters seem to be a result of the very cold temperatures that developed across Siberia this October.  The cold air across Siberia both being advected out across the North Pacific and strengthening the westerlies across the North Pacific have dramatically cooled SSTs in the North Pacific.  This seems analogous to the winters of 2013/14 and 2014/15 when cold temperatures in Canada cooled North Atlantic SSTS and strengthened the Jet Stream to record speeds as it headed towards Europe.  This dramatic cooling of SSTs demonstrates we are more confident that the atmosphere forces SSTs than SSTs force the atmosphere in the mid-latitudes.  Warmer than normal SSTs to the north near Alaska and colder than normal SSTs across the mid-latitudes, could favor a southward shift the in the Jet Stream across the North Pacific this winter.  The cool waters across the mid-latitudes could help strengthen the Aleutians low further south opposite to what might be expected during La Niña.

And the weak polar vortex could lead to intense cold air outbreaks over the northern hemisphere continents in midwinter. The Climate Prediction Center’s forecast of a warm winter across the southern states may be disrupted by intense cold outbreaks because the weak polar vortex will be unable to keep the cold air locked up in the northern climes. The Arctic ocean may experience unprecedented heat at the same time that brutal cold builds over Siberia. Where that brutally cold Siberian air goes will determine who gets the cold winter.