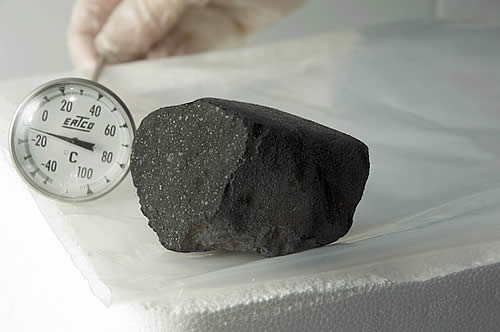 This is one of the Tagish Lake meteorite fragments. Credit: Michael Holly, Creative Services, University of Alberta.

NASA—(ENEWSPF)— Some asteroids may have been like "molecular factories" cranking out life’s ingredients and shipping them to Earth via meteorite impacts, according to scientists who’ve made discoveries of molecules essential for life in material from certain kinds of asteroids and comets. Now it appears that at least one may have been less like a rigid assembly line and more like a flexible diner that doesn’t mind making changes to the menu.

In January, 2000, a large meteoroid exploded in the atmosphere over northern British Columbia, Canada, and rained fragments across the frozen surface of Tagish Lake. Because many people witnessed the fireball, pieces were collected within days and kept preserved in their frozen state. This ensured that there was very little contamination from terrestrial life.

"The Tagish Lake meteorite fell on a frozen lake in the middle of winter and was collected in a way to make it the best preserved meteorite in the world," said Dr. Christopher Herd of the University of Alberta, Edmonton, Canada, lead author of a paper about the analysis of the meteorite fragments published June 10 in the journal Science.

"The first Tagish Lake samples — the ones we used in our study that were collected within days of the fall — are the closest we have to an asteroid sample return mission in terms of cleanliness," adds Dr. Michael Callahan of NASA’s Goddard Space Flight Center in Greenbelt, Md., a co-author on the paper.

The Tagish Lake meteorites are rich in carbon and, like other meteorites of this type, the team discovered the fragments contained an assortment of organic matter including amino acids, which are the building blocks of proteins. Proteins are used by life to build structures like hair and nails, and to speed up or regulate chemical reactions. What’s new is that the team found different pieces had greatly differing amounts of amino acids.

"We see that some pieces have 10 to 100 times the amount of specific amino acids than other pieces," said Dr. Daniel Glavin of NASA Goddard, also a co-author on the Science paper. "We’ve never seen this kind of variability from a single parent asteroid before. Only one other meteorite fall, called Almahata Sitta, matches Tagish Lake in terms of diversity, but it came from an asteroid that appears to be a mash-up of many different asteroids."

By identifying the different minerals present in each fragment, the team was able to see how much each had been altered by water. They found that various fragments had been exposed to different amounts of water, and suggest that water alteration may account for the diversity in amino acid production.

"Our research provides new insights into the role that water plays in the modification of pre-biotic molecules on asteroids," said Herd. "Our results provide perhaps the first clear evidence that water percolating through the asteroid parent body caused some molecules to be formed and others destroyed. The Tagish Lake meteorite provides a unique window into what was happening to organic molecules on asteroids four-and-a-half billion years ago, and the pre-biotic chemistry involved."

If the variability in Tagish Lake turns out to be common, it shows researchers have to be careful in deciding whether meteorites delivered enough bio-molecules to help jump-start life, according to the team.

"Biochemical reactions are concentration dependent," says Callahan. "If you’re below the limit, you’re toast, but if you’re above it, you’re OK. One meteorite might have levels below the limit, but the diversity in Tagish Lake shows that collecting just one fragment might not be enough to get the whole story."

Although the meteorites were the most pristine ever recovered, there is still some chance of contamination though contact with the air and surface. However, in one fragment, the amino acid abundances were high enough to show they were made in space by analyzing their isotopes.

Isotopes are versions of an element with different masses; for example, carbon 13 is a heavier, and less common, variety of carbon. Since the chemistry of life prefers lighter isotopes, amino acids enriched in the heavier carbon 13 were likely created in space.

"We found that the amino acids in a fragment of Tagish Lake were enriched in carbon 13, indicating they were probably created by non-biological processes in the parent asteroid," said Dr. Jamie Elsila of NASA Goddard, a co-author on the paper who performed the isotopic analysis.

The team consulted researchers at the Goddard Astrobiology Analytical Lab for their expertise with the difficult analysis. "We specialize in extraterrestrial amino acid and organic matter analysis," said Dr. Jason Dworkin, a co-author on the paper who leads the Goddard laboratory. "We have top-flight, extremely sensitive equipment and the meticulous techniques necessary to make such precise measurements. We plan to refine our techniques with additional challenging assignments so we can apply them to the OSIRIS-REx asteroid sample return mission."

OSIRIS-REx (Origins, Spectral Interpretation, Resource Identification, Security — Regolith Explorer) is a Goddard-managed mission, led by the University of Arizona, that will be launched toward asteroid "1999 RQ36" in 2016 and return a sample to Earth in 2023. The OSIRIS-REx team is led by Dr. Michael Drake, Director of the University of Arizona’s Lunar and Planetary Laboratory.

The Tagish Lake research was funded by the Natural Sciences and Engineering Research Council of Canada, the Alberta Ingenuity Fund, and NASA.