Washington, DC–(ENEWSPF)–February 15, 2013.  Bats around the U.S. are being decimated by White Nose Syndrome (WNS). The deadly disease was detected recently at Kentucky’s Cumberland Gap National Historic Park, according to the National Park Service. Based on laboratory testing, three bats were discovered with WNS, coming from three separate caves in the park.

The cold-loving fungus thrives on hibernating bats, spreading in 2006 from a cave in New York State to 21 other states in the East and Midwest. In 19 of these states there have been confirmed cases of WNS, not including detections in four Canadian Provinces (see map). White nose syndrome is usually transmitted bat-to-bat, although the spore can also spread through human clothing, shoes or gear. The fungus causing WNS, Geomyces destructan, is extremely lethal to hibernating bats–though posing no health threats to humans, pets, or other animals– killing 90% of bats where the fungus had persisted for a year or more, totaling 5.8 million bat deaths since 2006. 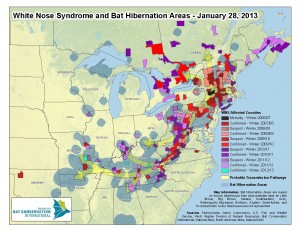 While location certainly plays a role in bat susceptibility, bat mortality is largely attributable to changes in their immune system during hibernation. Research published by the U.S. Geological Survey in 2012  indicates that bats are susceptible to infection during their hibernation period as their body temperature and their immune system are depressed, allowing the fungus to spread unchecked over their wings, wears and muzzles. Without any cellular response to the disease, the pathogen destroys important tissue particularly in the wings. Infected bats often emerge from hibernation early and can be seen flying around in midwinter. These bats usually freeze or starve to death. If the infected bats actually survive the winter, they face the challenge of openly inflamed wounds prone to infection, as well as tears in their wings caused by the disease.

The startling impact to North American bats is in part because they have not yet developed an immune response or tolerance for the fungus as bats in Europe have, but may also be linked to toxic chemicals or other environmental factors interacting with the disease.

While park officials can use decontamination protocol for visitors to the caves, unfortunately there is little they can do to stop the bat-to-bat transmission of WNS. “The bats are moving it pretty quickly and efficiently on their own, and we don’t have any way we can prevent that spread,” said spokeswoman Ann Froschauer, of the federal Fish and Wildlife Service.

Bats are a crucial species in ecosystem functioning. They are one of the only nocturnal pollinators and the only nocturnal insect predator in the US, playing a key role both for plants and for farmers. Organic farmers in particular, are reliant on bat pollinators as a pest management tool: one brown bat can kill between 3000 and 7000 insects per night. A study published in 2011 in the journal Science estimated that bats provide $3.7 Billion to $53 Billion per year worth of pest control services to agricultural operations, and that number does not include pollination services.

Bat pollination, technically known as chiropterophily, is integral for many wild and commercial tropical fruits. The next time you eat a guava, avocado, fig, peach, clove, cashew, or mango you might want to thank the bat. Indeed, over 500 plants worldwide are completely or partially dependent on bat pollination.

Beyond Pesticides will continue to advocate for pollinator species, including bats, to learn more about our work go to our Pollinator Protection website. For more information bats  or white nose syndrome, go to Bat Conservation International  or WhiteNoseSyndrome.org.