Washington, DC–(ENEWSPF)–June 18, 2015.  A major international study on bee pollination involving 58 researchers finds that astonishingly few bee species are responsible for pollinating crops worldwide, and offers compelling economic rationale for conserving wild bees. The study, published in Nature Communications, calculates that the value of wild bee pollination to the global food system at $3,000 per hectare of insect-pollinated agricultural land, a number in the billions globally. However, research also indicates that just two percent of wild bee species pollinate 80 percent of bee-pollinated crops worldwide. While the study shows that contribution of wild bees to crop production is significant, researchers warn that conserving the biological diversity of bees requires more than just ecosystem-service-based arguments. 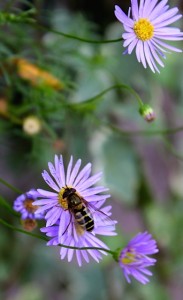 “Rare and threatened species may play a less significant role economically than common species, but this does not mean their protection is less important,” says Professor David Kleijn, PhD of the Netherlands’ Wageningen University, who led the study.

The economic benefits to people from nature –such as crop pollination, water purification, and carbon storage– are increasingly known as ecosystem services. The fact that nature provides these services has increasingly been used as a reason to protect the environment and its biodiversity. Research strongly indicates that biodiversity promotes environmental productivity, stability, and resilience. Beyond Pesticides’ report, Preserving Biodiversity, As if Life Depends on it, notes that by targeting individual species – both as commodities to produce and pests to attack– chemical-intensive practices sacrifice the benefits of biodiversity and jeopardize the very species that comprise it. While causing harm to biodiversity, chemical-intensive strategies in agriculture are not proven to be necessary in light of effective organic practices.

“This study shows us that wild bees provide enormous economic benefits, but reaffirms that the justification for protecting species cannot always be economic,” says Taylor Ricketts, Ph.D. of the University of Vermont’s Gund Institute For Ecological Economics, a study co-author. “We still have to agree that protecting biodiversity is the right thing to do.”

The study advances our understanding of wild bees’ crucial role in the global food system. About two-thirds of the world’s most important crops benefit from bee pollination, including coffee, cacao and many fruits and vegetables. Wild pollination is increasingly important with the growing instability of honey bee colonies. According to the study, wild bees’ agricultural value is now similar to that of honey bees, which are no longer considered wild in many regions due to their intense management.

Mounting scientific evidence points to the role of pesticides in bee declines across the globe, especially to neonicotinoids which, even at low levels, have been shown to impair foraging, navigational and learning behavior in bees, as well as suppress their immune system to the point of making them susceptible to pathogens and parasites. Other recent research finds that as pesticide use on farms have increased, wild bee populations have plummeted.

Do Your Part to Help Protect Biodiversity
The paper outlines bee-friendly practices for farmers, including maintaining wildflowers and grass strips, utilizing hedgerows, organic farming techniques, and limiting the use of pesticides and other chemicals. For a hands on approach on how you can protect biodiversity, see Do-it-Yourself Biodiversity.

Beyond Pesticides has long advocated for organic management practices as a means to foster native pollinator health and broader biodiversity. Instead of prophylactic use of pesticides and scheduled sprays, responsible organic farms focus on fostering habitat for pest predators and pollinators alike, set action levels for pests based upon monitoring, and only resort to judicious use of least-toxic pesticides when other cultural, structural, mechanical, and biological controls have been attempted and proven ineffective. To learn more about the benefits of organic agriculture, visit Beyond Pesticides’ webpage.

Take the Pledge
Declare your garden, yard, park or other space as pesticide-free and pollinator friendly. It does not matter how large or small your pledge is, as long as you contribute to the creation of safe pollinator habitat. Sign the pledge today. Need ideas on creating the perfect pollinator habitat? The Bee Protective Habitat Guide can tell you which native plants are right for your region.

Pollinator Week
This week is Pollinator Week. Help us #BuildTheBuzz and check out the list of activities that Beyond Pesticides and its allies are hosting this week. With one in three bites of food reliant on bees and other insects for pollination, the decline of honey bees and other pollinators due to pesticides, and other man-made causes demands immediate action. For more on this and what you can do to protect pollinators, visit Beyond Pesticides’ BEE Protective webpage and buy a Pesticide-Free Zone sign for your yard.