Temperatures Will Soar Across Western United States This Week 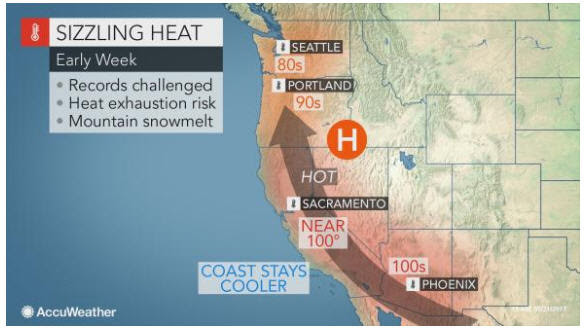 The recent period of dry weather in many Western cities will make it easier for heat to build in the region.

“A large area of high pressure will transport some of the warmest air since last summer across the West Coast early this week,” AccuWeather Meteorologist Brett Rathbun said. “Records will be challenged from Washington to California.”

“Seattle could have its first day above 80 F since last August [on Monday],” Rathbun said.

“Portland, Oregon, could break 90 F for the first time since August,” Rathbun said. The city will challenge Monday’s record high of 95 F from 2001.

Even in late July and August, normal temperatures only peak in the middle and upper 70s in Seattle and the lower 80s in Portland.

Monday’s record high to beat is 100 F in Sacramento, California; the forecast high in the upper 90s will come close.

Residents looking to beat the heat can head to the beaches, where a cooling effect from the Pacific Ocean will prevent temperatures from significantly soaring.

While the century mark is not uncommon in the Central Valley of California in the summertime, these conditions will be the hottest of the season thus far.

Residents must take precautions to enjoy the heat and sunshine responsibly.

The sun angle is currently similar to that of late July, making for a very high UV index and increased threat of sunburns.

Heat exhaustion is also a dangerous side-effect of the upcoming weather pattern.

While the heat will be most extreme in the lower elevations, the unusual warmth will lead to rapid snowmelt in the mountains, according to AccuWeather Meteorologist Jim Andrews.

“The melting snow will cause rivers flowing out of the Sierra Nevada to rise,” Andrews said. “The Walker River near Mason, Nevada, is expected to reach major flood stage later this week.”

For those looking to dip into the streams and rivers to beat the heat should find other means of cooling down.

“Most rivers flowing out of the Sierra and across the Pacific Northwest are either flowing too fast due to melting snow or are too cold to enter,” AccuWeather Senior Meteorologist Kristina Pydynowski said. “There is a risk of cold water shock.”

The heat is expected to break after only a few days, providing relief to the baking West Coast.

“A storm will begin to cool the West down by the middle of the week, especially across the Pacific Northwest,” Andrews said.