Washington, DC–(ENEWSPF)–October 2, 2013.  New research reveals that Costa Rica’s iconic spectacled caiman crocodiles are under threat from pesticides used on the country’s massive banana plantations. Nearly two million tons of bananas are shipped out of the small South American country each year, and exports are rising alongside with the use of hazardous pesticides. Both past and present use of agricultural chemicals has caused significant impacts on the health of the spectacled caiman, according to scientists from the study published in the journal Environmental Toxicology and Chemistry. 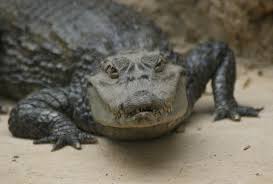 Researchers found that the pesticide burden on the caiman increases as they move closer to banana plantations. “The animals are very, very thin—about 50 percent thinner than those away from the plantations,” said study co-author Peter Ross, Ph.D, an aquatic ecotoxicologist and associate professor at the University of Victoria in British Columbia. The scientists note that it is unclear whether the toxic effects of the pesticides are hurting the caiman’s health, or whether the chemicals have caused a more systemic problem, knocking out the prey on which the animals depend.

Whatever the case may be, results of the study show that high-trophic level species are being adversely affected by the use of agricultural pesticides on banana plantations, and effects seen at the top of the food chain are indicative of environmental damage throughout the ecosystem. Researchers hope that the study will highlight the lax rules and enforcement surrounding pesticides in Costa Rica, which ranks second in the world for intensity of pesticide use, and has seen the use of agricultural chemicals double in the past 20 years. “Without adequate enforcement of regulations, dangerous practices, such as aerial spraying close to streams or washing application equipment in rivers, also contributes to contamination downstream,” said Paul Grant, Ph.D, lead author of the study.

Pesticide use on banana plantations has not only affected the health of the surrounding ecosystem, but also affected humans living and working on or near the plantations. Earlier this year, Beyond Pesticides reported on a study published in the journal Environmental Research, which showed that children living near chemical intensive banana plantations are exposed to twice as much of the neurotoxic insecticide chlorpyrifos as children living near organic plantations. In 2010, Dole Food Co., which controlled 19% of global banana production in 2009, announced a settlement with farmworkers claiming that they became sterile as a result of exposure to the chemical dibromochloropropane, a soil fumigant used on banana plantations that has since been banned.

Costa Rica provides a perfect climate for the seedless Cavendish banana, which is exported widely throughout the western world. The bananas are reproduced through cuttings and grow in large monocultures; because most all bananas grown for export are nearly identical genetically they are an easy target for insects and disease. However, toxic chemicals are not necessary in order to produce marketable bananas. As evidenced by a fourfold increase in U.S. imports between 2000 and 2010, organic banana production is a safer, viable alternative to chemical intensive practices that can harm sensitive wildlife, children, and farmworkers. Organic methods include planting several varieties of bananas and rotating crops to lessen the chance of pest infestation, using pheromone traps to lure away pests, digging trenches around the banana plants, removing diseased plants by hand to reduce the spread of infestations and disease, and boosting the soil with organic matter and beneficial organisms to strengthen plants and improve soil health.

Conventional banana production is one of the second most pesticide intensive agricultural systems in the world, next to cotton. Because of its thick skin, bananas are widely considered one of the “cleaner” conventional crops to eat, however Beyond Pesticides encourages consumers to think about the big picture, and support a wider shift toward organic practices through their purchases. Buying organic is a simple move that makes a big difference in preventing unnecessary contamination to themselves, the environment, and those living near pesticide treated fields. For more information on the chemicals used on everyday conventional produce, see the Eating With a Conscience website. And for more information on why organic is the right path for the future of agriculture, see Beyond Pesticides’ Organic Agriculture webpage.