Washington, DC–(ENEWSPF)–November 17, 2014.  In anticipation of the lawsuit by agrichemical giants following a newly passed initiative to suspend the planting of genetically engineered (GE) crops in Maui, five residents preemptively filed a lawsuit last Wednesday, November 12 beating their opponents by one day. The moratorium is only a temporary measure that bans GE crops until the county analyzes the public health and environmental effects, and it is deemed safe. Yet, despite this Monsanto, along with Dow AgroSciences, the Maui Farm Bureau and other businesses filed their own lawsuit against the county Thursday, November 13 saying that the “referendum is invalid and contrary to long established state and federal laws that support both the safety and lawful testing and planting of GMO plants.” 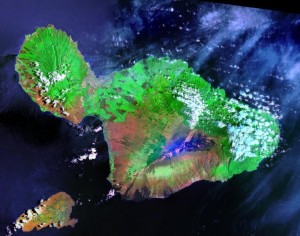 Maui County residents Dr. Lorrin Pang, Mark Sheehan, Lei’ohu Ryder, Bonnie Marsh and Alika Atay, along with the Shaka Movement, filed their lawsuit in the Second Circuit court in Hawaii against the county, Monsanto and Dow AgroSciences. The lawsuit seeks to assure transparency and influence over the implementation of the initiative, in light of the enormous amount of money that the ag companies have poured into the county in an attempt to beat the initiative. According to Honolulu Civil Beat reporters, opponents of the measure outspent advocates more than 87 to 1, amounting to $300 for every “no” vote.

“We applaud the county’s recent indication that they will implement the moratorium,” Mark Sheehan, spokesperson for the citizen group in a statement from his attorney, according to Maui Now. “However, given the strong prior opposition of the Maui County Council and Mayor’s Office during the campaign, we want to ensure that the citizens of Maui have full access to the implementation process and that the new law is properly administered.”

The resident’s complaint states: “Plaintiffs bring this action seeking declaratory relief against Defendants in order to (1) assure that the GMO Bill is timely and properly implemented and to be able to assist and participate in the County’s implementation of the GMO Bill, including being consulted by the County with respect to the GMO Bill’s implementation; and (2) resolve the claims that the GMO bill is not legal and enforceable, as there is an actual controversy and threat of imminent and inevitable litigation regarding this issue.”

In addition to pouring money to fight the initiative, the litigation from the agrichemical giant companies came as no surprise, as they had already promised to file a lawsuit against Maui if the memorandum passed. Previously, Syngenta, DuPont Pioneer, BASF Plant Science LP, and Dow AgroSciences also filed a lawsuit against the neighboring county of Kauai to prevent a similar measure, Ordinance 960, from being implemented. While Kauai’s law did not impose a full ban of GE farming, it did require mandatory notification concerning pesticide applications and buffer zones for crops and pesticide spraying in certain areas. Even with these more moderate restrictions, the Kauai law was stuck down by a federal court in August. While attorneys defending the law filed an appeal in the 9th Circuit in September, some Kauai County Councilmen have introduced a bill to repeal the challenged law, which would invalidate the appeal.

The initiative in Maui is part of a growing movement on the Islands that seeks to protect health and the environment while strengthening local food economies and resiliency. Residents living on the Hawaiian Islands are subject to a particularly pronounced form of environmental assault, as the state’s premiere growing conditions have made it a prime target for agrichemical companies to test new, experimental forms of GE crops. Data released earlier this year reveals that high levels of restricted use pesticides, in some cases almost double the pounds per acre average of other states, are being used in Kauai County. Residents of the Hawaiian Islands that live, work, or go to school near these fields are subject to incessant pesticide spraying, as the climate provides a year-round growing season for GE crops. A May 2014 report found 25 herbicides, 11 insecticides and 6 fungicides in Hawaii’s waterways, underscoring resident concerns for both the land and human health.

Despite the deep pockets of the agrichemical industry, residents both in Hawaii and across the United States continue to raise their voices for increased protections from GE crops and the hazardous pesticide use that is associated with their planting. In fact, Maui is not the first U.S locality to bar the planting of GE crops. In May, Jackson and Josephine County, Oregon voted overwhelmingly to ban the cultivation, production, and distribution of GE crops within their borders. “We fought the most powerful and influential chemical companies in the world and we won,” said Elise Higley, a Jackson County farmer and representative from Our Family Farms Coalition told Oregon Live. The fights may be long, drawn out, and grueling, but concerned residents continue to stand up for common sense protections in order to safeguard the health of themselves, their families, their community members, and the unique areas in which they live.

Additional background on the fight for increased protections on the Hawaiian Islands, including testimony Beyond Pesticides provided in support of Kauai’s Bill 2491, can be found here. For more information on the hazards that continue to be associated with the growth of GE agriculture, see Beyond Pesticides Genetic Engineering webpage.