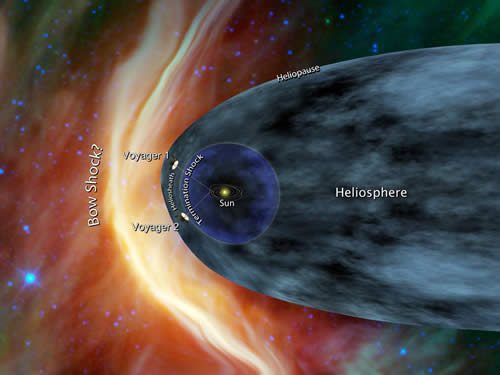 Voyagers in the Heliosheath (Artist Concept)

This artist’s concept shows NASA’s two Voyager spacecraft exploring a turbulent region of space known as the heliosheath, the outer shell of the bubble of charged particles around our sun. After more than 33 years of travel, the two Voyager spacecraft will soon reach interstellar space, which is the space between stars.

Our sun gives off a stream of charged particles that form a bubble around our solar system known as the heliosphere. The solar wind travels at supersonic speeds until it crosses a shockwave called the termination shock. That part of our solar system is shown in dark blue. Voyager 1 crossed the termination shock in December 2004 and Voyager 2 did so in August 2007. Beyond the termination shock is the heliosheath, shown in gray, where the solar wind dramatically slows down and heats up. Outside those two areas is territory dominated by the interstellar wind, which is blowing from the left in this image. As the interstellar wind approaches the heliosphere, a bow shock forms, indicated by the bright arc.

The Voyagers were built by NASA’s Jet Propulsion Laboratory in Pasadena, Calif., which continues to operate both spacecraft. JPL is a division of the California Institute of Technology in Pasadena. The Voyager missions are a part of the NASA Heliophysics System Observatory, sponsored by the Heliophysics Division of the Science Mission Directorate.

For more information about the Voyager spacecraft, visit http://www.nasa.gov/voyager .

NASA-(ENEWSPF)- Data from NASA’s Voyager 1 spacecraft indicate that the venerable deep-space explorer has encountered a region in space where the intensity of charged particles from beyond our solar system has markedly increased. Voyager scientists looking at this rapid rise draw closer to an inevitable but historic conclusion – that humanity’s first emissary to interstellar space is on the edge of our solar system.

"The laws of physics say that someday Voyager will become the first human-made object to enter interstellar space, but we still do not know exactly when that someday will be," said Ed Stone, Voyager project scientist at the California Institute of Technology in Pasadena. "The latest data indicate that we are clearly in a new region where things are changing more quickly. It is very exciting. We are approaching the solar system’s frontier."

The data making the 16-hour-38 minute, 11.1-billion-mile (17.8-billion-kilometer), journey from Voyager 1 to antennas of NASA’s Deep Space Network on Earth detail the number of charged particles measured by the two High Energy telescopes aboard the 34-year-old spacecraft. These energetic particles were generated when stars in our cosmic neighborhood went supernova.

"From January 2009 to January 2012, there had been a gradual increase of about 25 percent in the amount of galactic cosmic rays Voyager was encountering," said Stone. "More recently, we have seen very rapid escalation in that part of the energy spectrum. Beginning on May 7, the cosmic ray hits have increased five percent in a week and nine percent in a month."

This marked increase is one of a triad of data sets which need to make significant swings of the needle to indicate a new era in space exploration. The second important measure from the spacecraft’s two telescopes is the intensity of energetic particles generated inside the heliosphere, the bubble of charged particles the sun blows around itself. While there has been a slow decline in the measurements of these energetic particles, they have not dropped off precipitously, which could be expected when Voyager breaks through the solar boundary.

The final data set that Voyager scientists believe will reveal a major change is the measurement in the direction of the magnetic field lines surrounding the spacecraft. While Voyager is still within the heliosphere, these field lines run east-west. When it passes into interstellar space, the team expects Voyager will find that the magnetic field lines orient in a more north-south direction. Such analysis will take weeks, and the Voyager team is currently crunching the numbers of its latest data set.

"When the Voyagers launched in 1977, the space age was all of 20 years old," said Stone. "Many of us on the team dreamed of reaching interstellar space, but we really had no way of knowing how long a journey it would be — or if these two vehicles that we invested so much time and energy in would operate long enough to reach it."

Launched in 1977, Voyager 1 and 2 are in good health. Voyager 2 is more than 9.1 billion miles (14.7 billion kilometers) away from the sun. Both are operating as part of the Voyager Interstellar Mission, an extended mission to explore the solar system outside the neighborhood of the outer planets and beyond. NASA’s Voyagers are the two most distant active representatives of humanity and its desire to explore.

The Voyager spacecraft were built by NASA’s Jet Propulsion Laboratory in Pasadena, Calif., which continues to operate both. JPL is a division of the California Institute of Technology. The Voyager missions are a part of the NASA Heliophysics System Observatory, sponsored by the Heliophysics Division of the Science Mission Directorate in Washington.

For more information about the Voyager spacecraft, visit: http://www.nasa.gov/voyager .