Washington, DC–(ENEWSPF)–April 1, 2014.  Earthworms that make their home in contaminated soil do so at a significant cost, according to French and Danish researchers. Results of the study, “Acclimation of earthworms to chemicals in anthropogenic landscapes, physiological mechanisms and soil ecological implications,” found that earthworms exposed to fungicides in conventionally farmed soil were at a stark disadvantage to worms in land managed organically. Earthworms exposed to the fungicide product Opus, containing active ingredient epoxiconazole, were able to detoxify the chemical, but gained half as much weight as worms from an organic farm, where their population was also 2 to 3 times higher.

The study observed the adaptation capability of earthworms by comparing the 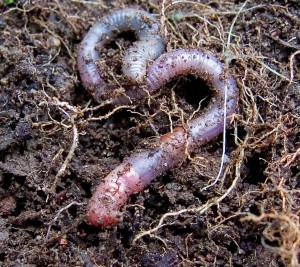 response from those in land managed conventionally for 20 years to those in land managed organically for the same amount of time. Researchers focused on the metabolic changes seen in each group of worms after exposure to epoxiconazole. According to the study’s authors, “The fungicide increased metabolism rate in the worms, both the adapted worms and the not adapted worms. In the not adapted worms we saw that their energy reserve of glycogen was used faster. Contrastingly, only in the adapted worms we saw that amino acids and protein contents increased, suggesting a detoxification mechanism. They also increased their feeding activity, possibly to compensate for the increase in energy demand.”

Expending all of this energy takes a heavy toll on the earthworm population as a whole. “We see that the worms have developed methods to detoxify themselves, so that they can live in soil sprayed with fungicide. They spend a lot of energy on detoxifying, and that comes with a cost: The worms do not reach the same size as other worms, and we see that there are fewer of them in sprayed soil. An explanation could be that they are less successful at reproducing, because they spend their energy on ridding themselves of the pesticide”, the researchers, PhD student Nicolas Givaudan and associate professor, Claudia Wiegand, PhD, say. Worms taken from organic soil weighed .6 grams on average while those living in conventional soil averaged only .3 grams.

Researchers note that previous studies have found that 70% of fungicides do not reach the target crop, eventually leading to residual compounds in the soil. The fact that this investigation focused on environmentally relevant sub-lethal concentrations of epoxiconazole provides further evidence of how the conventional approach to agriculture weakens the resiliency of natural systems, even when these chemicals are “used as directed.” Earthworms provide crucial ecosystem services, increasing soil porosity and aggregation, providing channels for root growth, and stimulating microbial activity as digested organic matter passes through their intestines, among numerous other benefits. Recent studies show that earthworms even play an important role in sequestering carbon dioxide in the soil.

But in order for organic to maintain strong protections for environmental and human health, it is critically important for consumers to become involved in the organic rulemaking process. The National Organic Standards Board (NOSB), the rulemaking body that votes to allow or prohibit substances and practices in certified organic food and farming, will meet April 29- May 1, 2014 at the St. Anthony Hotel in San Antonio, Texas. Beyond Pesticides strongly encourages concerned consumers to visit the Keeping Organic Strong webpage, review the issues before the NOSB, and provide a unique public comment at regulations.gov. Also see Beyond Pesticides’ Save Our Organic Campaign, to help defend organic standards against changes from the U.S. Department of Agriculture that will weaken public trust in the organic food label.