Eastern US Thanksgiving Week Storm May Cause Travel Trouble 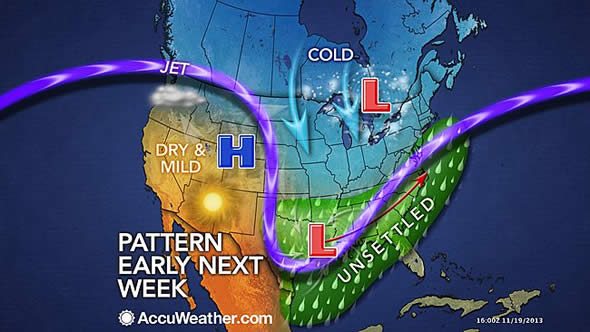 AccuWeather Global Weather Center- (ENEWSPF)- AccuWeather.com reports early indications are that the weather will cooperate for most holiday travelers over the Plains and West during the week of Thanksgiving, but there could be some problems in the South and East.

The painful blast of wind-driven Arctic air set to invade the Plains and East this weekend will fade in most areas and a storm sinking southward in the West this week will move away.

Cold air, bands of lake-effect snow and flurries will linger over the Upper Midwest much of next week.

However, the same storm affecting the West this week is forecast to slide slowly eastward during the week of Thanksgiving.

For those hitting the roads or airways early next week, areas of rain and mountain snow will move slowly out from the Four Corners region toward the Gulf Coast. Drenching rain and thunderstorms will crawl eastward along the Gulf Coast Tuesday.

In the wake of the Southwest storm, most areas in the Plains and West are likely to be free of rain and snow for the big travel day Wednesday. The only exception may be the coastal Northwest, where rain and mountain snow may arrive.

The speed at which this storm moves along and how sharp of a left turn the storm takes later next week is uncertain.

For most areas along the East Coast and South, it will be a question of rain or not on Tuesday, Wednesday and Thanksgiving Day. Rain, poor visibility and low ceilings alone on Wednesday can lead to its share of major delays.

However, just enough chilly air may be in place beginning around the central and southern Appalachians northward to New England for snow and ice, depending on the track, strength and timing of that Gulf Coast storm, which is likely to become an Atlantic coast storm.

According to AccuWeather.com Expert Senior Meteorologist Bernie Rayno, “There are a lot of possibilities next week with the storm in the East, but whether or not there is snow north and west of the I-95 corridor is still uncertain at this time.”

Those following computer models may have noticed the wild swings with the timing and track of the storm in the East next week from one day to the next. At this time, the pattern remains progressive enough that computer forecasts on rain versus snow and timing are not to be trusted this far in advance.

The details on the track and speed of that storm during the middle of next week along the Atlantic Seaboard and over the Appalachians will unfold later this week into the weekend.

At this early stage, the situation does not warrant changing travel plans.