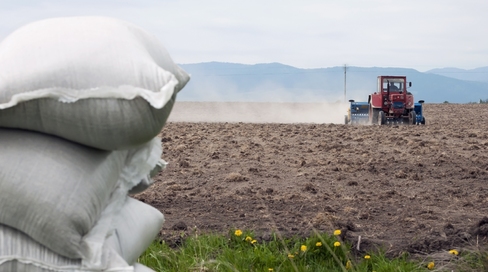 Washington, DC–(ENEWSPF)–October 17, 2014.  Yesterday, the U.S. Environmental Protection Agency (EPA) released findings concluding that neonicotinoid insecticides “provide negligible overall benefits to soybean production in most situations” and that most of the existing use on soybean seeds is merely “prophylactic.” Scientists worldwide have increasingly linked widespread uses of neonicotinoids, largely as seed coatings, to honey bee declines and poor health in a variety of pollinator species and other beneficial insects. Center for Food Safety (CFS) called on the agency to use the findings to reform policy and halt the use of these dangerous pesticides.

“EPAs findings corroborate what several studies have already indicated—neonicotinoid seed coatings have not provided the agricultural benefits they were supposed to bring,” said Peter Jenkins, CFS attorney spearheading a lawsuit against EPA over neonicotinoids. “It is abundantly clear that the costs of neonicotinoids outweigh the benefits, and there is no excuse for the agency to continue to allow such indiscriminate use.”

“EPA’s fundamental purpose is to protect the environment and so far they’ve been protecting the bottom line of chemical companies who have sold farmers a bill of goods” said Larissa Walker, pollinator campaign director at Center for Food Safety. “Maybe this new evidence will be enough to compel meaningful action that’s long overdue.”

According to EPA’s analysis, neonicotinoid seed coatings are used on more than 23 million acres of soybeans in the U.S., and more than 1 million pounds of the insecticides were applied to soybean seeds from 2008 – 2012.

“Chemical companies have been charging higher costs for coated seeds that have failed to deliver benefits.  Meanwhile, society at large continues to suffer the economic and environmental consequences of overusing neonicotinoids,” added Walker.

Neonicotinoids are a class of pesticides known to have acute and chronic effects on honey bees and other pollinator species and are considered a major factor in colony collapse. Neonicotinoid pesticides are also slow to break down, causing them to build up in environments where they are applied. They contaminate surface water, ground water, and soil, endangering not only pollinators, but also other beneficial species that inhabit these ecosystems.

In July 2014, the U.S. Fish and Wildlife Service (FWS) announced it will phase out neonicotinoid insecticides in all wildlife refuges nationwide by January 2016.

According to US Department of Agriculture (USDA), 10 million bee hives have been lost since 2006, representing a two billion dollar cost to beekeepers. USDA estimates pollinator services to be worth $20-30 billion annually.