Washington, DC–(ENEWSPF)–April 3, 2014.  A food container production company in New Jersey is finding out that the smallest of ingredients can have big implications for public health. Earlier this week, the U.S. Environmental Protection Agency (EPA) announced that it had issued a stop sale order to Pathway Investment Corp., manufacturer of Kinetic Go Green Premium Food Storage Containers and Kinetic Smartwist Series Containers. In addition to the order sent to Pathway, the EPA has also issued warning letters to Amazon, Sears, Wal-Mart and other large retailers directing them not to sell these products. 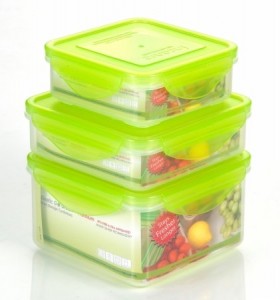 The reason for the order: nanosilver—an extremely small particle of silver that has been added to consumer products of all kinds during the last decade to combat bacteria, mold, and other microorganisms.

Because of nanosilver’s properties, it is considered a pesticide and active ingredient under the Federal Insecticide, Fungicide, and Rodenticide Act (FIFRA), the primary federal law governing pesticide use in the United States. Under FIFRA, any product containing an active ingredient that acts as a pesticide must be registered with EPA. For public health claims associated with pesticide use, EPA requires manufacturers to show that the product performs as intended and does not pose “unreasonable” adverse effects to the environment. “Unreasonable adverse effects on the environment,” is defined as one of two ways: (1) any unreasonable risk to man or the environment, taking into account the economic, social, and environmental costs and benefits of the use of any pesticide, or (2) a human dietary risk from residues that result from a use of a pesticide in or on any food inconsistent with the Federal Food Drug and Cosmetic Act (FFDCA). The manufacturer must also submit a proposed label for the product that meets all of FIFRA’s labeling requirements.

Considering that Pathway did not register its food container products that incorporate nanosilver into the plastic and thus failed to meet FIFRA’s registration requirements, EPA appears to have a pretty straightforward case. “Claims that mold, fungus or bacteria are controlled or destroyed by a particular product must be backed up with testing so that consumers know that the products do what the labels say,” said EPA Regional Administrator Judith A. Enck. “Unless these products are registered with the EPA, consumers have no information about whether the claims are accurate. The EPA will continue to take action against companies making unverified public health claims.”

EPA’s focus on Pathway’s failure to register and back up its performance claims, while applauded and legally accurate under FIFRA, ignores the real issue underlying nanosilver and its presence in any consumer products, let alone a food container: EPA’s own failure to apply the unreasonable adverse effects standard and perform an adequate registration process on all nanosilver products.

In November 2013, the Ninth Circuit issued a ruling concerning litigation filed by the Natural Resources Defense Council (NRDC) against EPA. The lawsuit challenged EPA’s conditional registration of nanosilver-laced textiles, because under the dubious conditional registration process (a loophole registration option that defers submission of normally required environmental effects and toxicity studies for indiscriminate periods of time) EPA did not require submission of a full breadth of toxicity data and thus did not properly evaluate the unreasonable adverse effects to the environment for the nanosilver textile products. NRDC argued that if EPA had conducted a thorough examination of toxicity data, it would have found unreasonable adverse effects to the environment, particularly with regard to aquatic species and the aggregate pesticide tolerance dose limits permitted in toddlers under the FFDCA. The Ninth Circuit agreed with NRDC and suspended the conditional registration of the textile products.

However, this ruling did not apply to the numerous other products containing nanosilver and underscores the issue that federal regulation of nanoparticles has thus far been lacking as a whole, despite studies highlighting concerns and some serious unanswered questions. In no case is this more evident than in the fact that the Kinetic products targeted in EPA’s stop-sale order had been allegedly approved by the U.S. Food and Drug Administration (FDA), the usual authority from which food container manufacturers must seek approval before placing a product on the market.

Beyond Pesticides continually advocates for stronger, clearer, and enforceable legal and regulatory standards that prevent dangerous and untested pesticides and products from entering the marketplace before they pose a threat to public health and the environment. Join us at our 32nd National Pesticide Forum, Advancing Sustainable Communities: People, Pollinators, and Practices, to continue the discussion, strategize, and interact with advocates, scientists, and policymakers on solutions to improve public health and environmental protections.