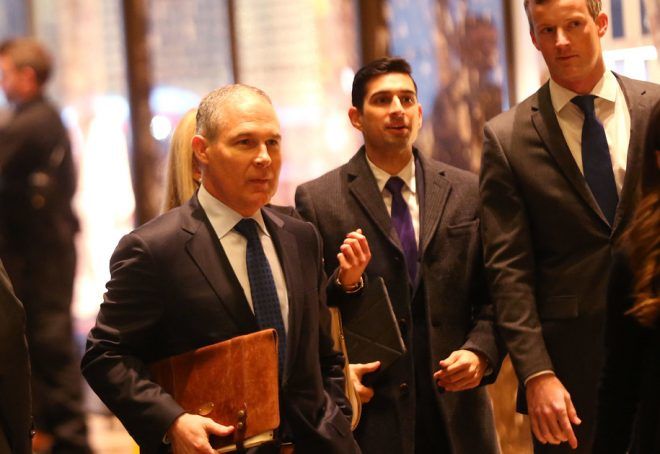 Donald Trump’s Secretary of State nominee may be the head of ExxonMobil, the man behind a $500 billion deal to drill the high arctic, and a ready source of funds for climate denying Congressmen. But Tillerson is warm and fuzzy panda next to Trump’s nominee to head the EPA.

The climate change denying, earthquake ignoring, friend-to-polluters Scott Pruit is being given the chance to address America’s crisis of too clear air and too clean water.

“As far as we can tell there’s literally nothing in his record showing any indication of protecting the environment in any way that matters,” Natural Resources Defense Council’s director of government affairs David Goldston said on a call with reporters on Wednesday. …

Since 2011 he has sued the EPA 13 times and has led the effort to overturn new water regulations and Obama’s signature climate policy.

Amazingly, this includes eight lawsuits that are still pending against the EPA, which will be there the day Pruitt takes the helm.

While the American Bar Association code of conduct advises attorneys against representing clients when a conflict of interest arises, as soon as Pruitt takes over as head of the EPA, the new Oklahoma attorney general will continue representing the state in the pending cases.

Among these suits is Oklahoma’s challenge to the Clean Power Plan, which Pruitt could simply enable by having the EPA lay down arms and stop fighting. It’s no wonder that Scott Pruitt’s supporters have assembled a Legion of Environmental Doom to make sure their man gets the job.

Pruitt’s supporters include many of the usual suspects. Such as …

Jim Inhofe is a four-term senator from Oklahoma, former chairman of the Senate Committee on Environment and Public Works, and the author of “The Greatest Hoax: How the Global Warming Conspiracy Threatens Your Future.”

It also includes the great Republican welfare system of “think tanks” that act to put a conservative-approved badge on whatever the Koch brothers request.

This trifecta of conservative think tanks—the Heartland Institute, the Competitive Enterprise Institute, and FreedomWorks—are all famous for promoting climate-change denial and have mobilized to support Pruitt.

This includes Heartland’s ongoing work in the realm of “CO2 is good for plants.” The excitement with which groups like the oil-loving FreedomWorks greets the idea of dismantling the EPA and turning it into an agency for the promotion of more smog-more better, makes Pruitt the one candidate many groups are most focused on passing.

That includes the shadowy America Rising Squared, whose funding is undisclosed. They’re the creators of the site confirmpruitt.com where the fossil fuel industry can be found praising Pruitt’s common sense approach to throwing away common sense.

It’s not clear where Pruitt will appear in the crowded confirmation calendar, but like other Trump nominees, his hearings will likely be timed at a point intended to drown any opposition in a flood of overlapping, controversial appointments.