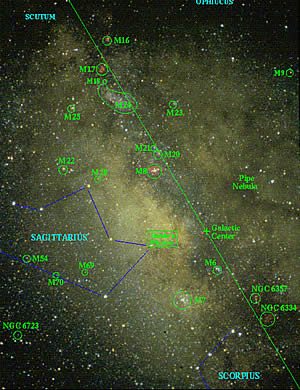 University of Zurich-(ENEWSPF)- Until now, it was merely assumed that low-mass and therefore extremely faint stars must exist. However, in view of the vast distances and weak luminosity of low-mass stars, even the most modern telescopes fail. Together with a Polish-Chilean team of researchers, Swiss astrophysicist Philippe Jetzer from the University of Zurich has now detected the first low-mass star in the globular cluster M22 indirectly. As their recent article accepted for publication in Astrophysical Journal Letters reveals, it involves a dwarf star that has less than a fifth of the mass of our sun and is 3.2 kiloparsecs from it (one kiloparsec corresponding to 3,210 light years).

The evidence, which enables the mass to be determined highly accurately, is based upon so-called gravitational microlensing and requires the highest technical standards available. The measurements were carried out on the ESO VLT 8-meter telescope with adaptive optics at the Paranal Observatory in Chile.

Major breakthrough in 2000
In August 2000 Polish astronomers discovered that the brightness of a star located at about two arcminutes from the center of the globular cluster M22 increased for twenty days. They suspected that the phenomenon was due to so-called gravitational microlensing, which is based on the fact that light spreads along a curved path near large masses as opposed to in a straight line. The brightness of the star increases briefly through the gravitation of an object crossing in front of it, which acts as a lens. The star – the source, in other words – appears brighter for a short time before fading again after passing by the lens. In order to confirm this supposition, the astronomers turned to gravitational microlensing specialist Philippe Jetzer from the University of Zurich. The control measurement carried out on July 17, 2011 at the Paranal Observatory confirmed the hypothesis. “The detailed analysis revealed that the source was outside M22,” explains Jetzer. “A low-mass star acted as a lens within the globular cluster itself.”