Washington, DC–(ENEWSPF)–December 10, 2013.  A former steward for Australian-based Quantas airlines is suing the Australian government claiming that frequent insecticide use in airplane cabins resulted in his Parkinson’s disease diagnosis. Australia is among 49 countries that require pesticide spraying on some or all flights. Pesticide use on flights into the United States is not required, but is permitted under international law. (See here for a breakdown of pesticide use in American-based airlines, and here for information from the U.S. Department of Transportation on pesticide use in aircrafts.) 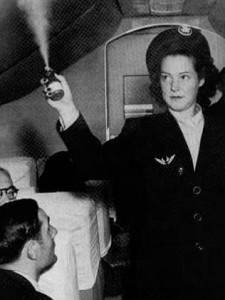 Brett Vollus, former Quantas airline steward, worked for the company for 27 years until this past May when he was diagnosed with Parkinson’s and a malignant brain tumor. “He [my doctor] asked me what I did for living and when I told him he just nodded and said: ‘Another one, I am seeing a lot of you’,” Mr. Vollus said to The Australian. “This is a nightmare that has ruined my life. I am very keen to start a legal action and if it can help others I am happy to lead the way.”

This case puts an international spotlight on growing evidence that pesticide use is linked to Parkinson’s disease. Parkinson’s expert Professor Kay Double, MD, from the University of Sydney’s Medical School remarked, “Certainly there is epidemiological evidence that the exposure to the chemicals in pesticides is associated with an increased risk of Parkinson’s disease. It is actually the number of times you are exposed and the amount you are exposed which increases the risk.”

Beyond Pesticides has worked to increase public awareness of the link between pesticide use and Parkinson’s disease through the Pesticide Induced Diseases Database, which currently features over 60 peer-reviewed studies that have researched the pesticides-Parkinson’s connection.  Late last month a study revealed that individuals with a genetic mutation were at increased risk of Parkinson’s disease if they were also exposed to low doses of pesticides. A new study in the journal Cell also provides firm evidence linking pesticides to Parkinson’s disease, as the researchers used pesticides to find the mechanisms by which the disease manifests itself.

“The fact that flight attendants were exposed in a very contained area, have a total exposure and are then left breathing the residual chemicals may have a role to play in their eventual diagnosis,” said Dr. Double. “We do know there are a number of these herbicides and pesticides that do damage to particular cells which leads to Parkinson’s disease.”

The most widely used pesticides for aircraft cabins are synthetic pyrethroids, particularly the chemicals d-phenothrin or permethrin. Multiple studies have revealed a link between permethrin and Parkinson’s disease. The pesticide has been shown to affect dopamine transport in the brain, as up-regulation (increased cellular response) of permethrin may increase the susceptibility of dopamine neurons to toxic insult, according to a 2006 study out of Emory University titled “Pyrethroid pesticide-induced alterations in dopamine transporter function.”A 2003 study from Virginia Tech researchers, titled “Differential up-regulation of striatal dopamine transporter and α-synuclein by the pyrethroid insecticide permethrin” found that permethrin-based insecticides cause a number of chemical events in the brain that could eventually lead to Parkinson’s disease, particularly for individuals with a genetic predisposition or those who have had previous exposure to neurotoxins. Permethrin may also lead to an overproduction of a-synuclein proteins, which can accumulate in the brain and form Lewy bodies, fibrous, abnormal tangles of proteins present in the brains of those with Parkinson’s.

While the Australian Department of Health asserts that spraying is important to preventing the spread of disease, and “The WHO has found no evidence that disinsection [pesticide] sprays, when used according to their guidelines and manufacturers’ instructions, are harmful to human health,” evidence shows that alternatives methods to control pests in airplanes without pesticides are effective, and don’t carry the risks of pesticides. One method is called the “air curtain,” where air curtains direct air currents at doorways to exclude pests. The U.S. Department of Agriculture has affirmed that this is an effective method at preventing pests from entering an aircraft.

In the U.S., a group in New Mexico, the Parkinson’s Disease Support Group of New Mexico, recently helped get House Memorial 42 passed through the state’s legislature. This memorial requests that studies be conducted regarding the impact of pesticides on citizens’ health, with particular focus on investigating the link between pesticides and Parkinson’s. The support group would like to see the action implemented in four phases:

As the connection between Parkinson’s and pesticide use becomes increasingly clear, pressure will continue to build for practices and methods that exclude pests without the use of hazardous chemicals. Whether in airplanes, farms, gardens, lawns, waterways, inside one’s own home, or the numerous other places where pesticides are often used, there are non-toxic and least-toxic alternatives that do not necessitate the use of hazardous chemicals. For more information on link between pesticides and Parkinson’s, see our Pesticide Induced Diseases Database, or read our 2008 Pesticides and You article “Pesticides Trigger Parkinson’s Disease.”