Washington, DC–(ENEWSPF)–August 18, 2014.  In a victory for environmental groups, conservationists, and fishing groups, the U.S. Environmental Protection Agency (EPA) finalized a settlement last Wednesday to restore no-spray buffer zones around waterways to protect imperiled salmon and steelhead from five toxic pesticides.  An initial agreement was reached in June, when it underwent public comment, and was ultimately filed August 13 without any substantive changes. The settlement follows litigation filed by Earthjustice, representing the Pacific Coast Federation of Fishermen’s Associations, the Northwest Coalition for Alternatives to Pesticides, and Defenders of Wildlife, back in 2010 that called for EPA adoption of reasonable fish protections from the insecticides. The buffers apply to salmon habitat throughout California, Oregon, and Washington to prohibit aerial spraying of broad-spectrum pesticides diazinon, chlorpyrifos, malathion, carbaryl, and methomyl within 300 feet of salmon habitat and prohibit ground-based applications within 60 feet. 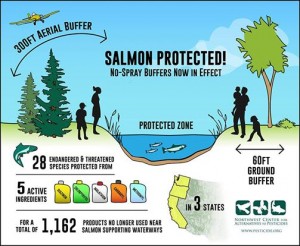 “Poisoning salmon rivers puts our people out of work while creating an unnecessary and expensive public health hazard,” said Glen Spain of the Pacific Coast Federation of Fishermen’s Associations, a West Coast commercial fishing industry trade association and co-plaintiff. “This agreement helps the coastal and inland communities that depend on salmon for their livelihoods and provides more certainty for landowners on safer use of these chemicals.”

The agreement provides detailed notice to state regulators, pesticide applicators, farmers, and the public about the required no-spray buffer zones. These buffers will remain in place until the National Marine Fisheries Service completes analyses of the impacts of these five pesticides on the fish. Then, the EPA must implement permanent protections grounded in the Fisheries Service’s findings.

“Before this agreement, we lacked clear or consistent rules to protect the health of our rivers and salmon fisheries from these toxins,” said Steve Mashuda, an Earthjustice attorney representing coalition. “This clears the road for the EPA and the Fisheries Service to continue to work together toward permanent protections that keep pesticides out of our waters.”

The chemicals regulated under the new buffer zones are not only dangerous to salmon; they pose a significant threat human health, other wildlife, and the environment at large. Chlorpyrifos is acutely toxic to bees, birds, mammals, aquatic life, and certain species of algae. There are also a wide range of adverse environmental effects linked to chlorpyrifos, including toxic to: beneficial insects, freshwater fish, other aquatic organisms, and birds, variety of plants, soil organisms, and domestic animals. It has been shown to bioaccumulate in fish and synergistically reacts with other chemicals. Diazinon is a moderately acutely toxic broad-spectrum insecticide. Like chlorpyrifos, diazinon affects the nervous system through the inhibition of AchE, an enzyme needed for proper nervous system function. Methomyl is a highly toxic compound in EPA toxicity class I, is highly toxic to birds, and moderately to highly toxic to fish and aquatic invertebrates. Repeated exposure to small amounts of methomyl may cause an unsuspected inhibition of cholinesterase, resulting in flu-like symptoms, such as weakness, lack of appetite, and muscle aches. EPA has classified malathion as a toxicity class III pesticide. Despite the fact that malathion is one of the less acutely toxic synthetic pesticides, numerous human poisoning have been reported. It is slightly toxic via the oral route and dermal route. Malathion is rapidly and effectively absorbed by practically all routes, including the gastrointestinal tract, skin, mucous membranes, and lungs. Carbaryl causes an array of serious neurotoxic effects in animals, including irreversible neurological damage and behavioral disturbances.

The buffers reinstated under the agreement were previously required by a 2004 court order after the federal courts ordered EPA to consult with the Fisheries Service over the impacts of these chemicals on the imperiled salmon. That injunction expired when the Fisheries Service completed its analysis of these chemicals in 2008 and 2009. While the Fisheries Service required EPA to adopt extensive permanent protections to keep these deadly chemicals out of salmon streams within one year, the agency failed to take action, leaving salmon and steelhead with no protection from these neurotoxic chemicals. The agreement resolves litigation filed by these groups in 2010 to compel EPA to adopt permanent protective measures in line with the Fisheries Service’s findings. This settlement will end years of litigation and save taxpayer money by allowing the EPA to focus its resources on permanent solutions.

Clean water is essential for human health, wildlife and a balanced environment; however water is being polluted at extremely high rates with chemicals, pesticides, nutrients, metals and other contaminants. According to Beyond Pesticides’ Eating with a Conscience database, over 50 pesticides are known surface or groundwater contaminants, according to data from the U.S. Geological Survey (USGS) or Environmental Protection Agency (EPA). Read Organic Land Management and the Protection of Water Quality, a fully cited fact sheet by Beyond Pesticides, or download our shorter, bi-fold brochure version for more in depth information on how organic practices can protect water quality.