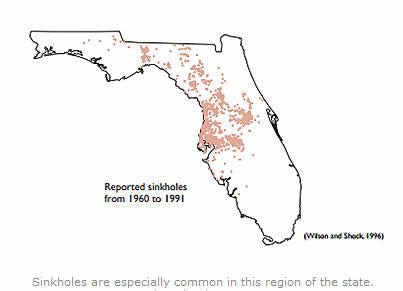 So far, a home’s patio has already been swallowed by the hole. Neighbors were evacuated as a precaution.

Dunedin, Fla., Fire Chief Jeff Parks told AccuWeather.com that, as of 10:30 a.m. EST, seven homes have been affected by the evacuations. Two of the homes will likely need to be condemned as a result. One of the homes was already vacant, and the remaining houses that are occupied will likely be able to be returned to later today.

"It’s an unfortunate situation for homeowners, but fortunately no one is hurt at this time," Chief Parks said.

Sinkholes are fairly common in Florida, as much of the ground is primed for the holes to form. Known as karst terrain, the ground is made of limestone, carbonate rock, salt beds or rocks that can dissolve over time as groundwater circulates through them. Heavy rain can also play a role in causing enough of a breakdown in the rock for the hole to open up. By contrast, a drought could also cause a sinkhole to form as the low water table causes a loss of stability.

AccuWeather.com Expert Senior Meteorologist Dan Kottlowski said that though conditions are not extremely dry, the area has been drier than usual since the end of summer. Rainfall amounts have been above normal overall for the year but have been about an inch below normal for the past few weeks.

Some sinkholes are "manmade," that is, affected by underground development, such as sewer systems, that increase the rate of degradation of the karst terrain. Director of the Eastern Geology and Paleoclimate Science Center for the U.S. Geological Survey Randall Orndorff told AccuWeather.com that there is no evidence that sinkholes are occurring more frequently. However, as human development increases in sinkhole-prone areas, it likely follows that more sinkholes would be reported.

Last March, a man in Seffner, Fla., lost his life when a sinkhole swallowed his home.

Chief Parks said that, aside from evacuating, calling 911 to report a sinkhole is an important safety measure to take.

This particular community has seen sinkholes in the past, as recently as five years ago. Chief Parks reported that a survey team had been in the area recently to look into filling some sinkhole risks.