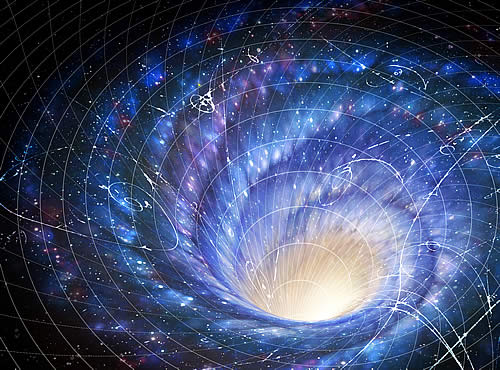 University of Warwick, UK-(ENEWSPF)- A University of Warwick physicist has produced a galaxy sized solution which explains one of the outstanding puzzles of particle physics, while leaving the door open to the related conundrum of why different amounts of matter and antimatter seem to have survived the birth of our Universe.

Physicists would like a neat universe where the laws of physics are so universal that every particle and its antiparticle behave in the same way. However in recent years experimental observations of particles known as Kaons and B Mesons have revealed significant differences in how their matter and anti matter versions decay. This “Charge Parity violation” or “CP violation” is an awkward anomaly for some researchers but is a useful phenomenon for others as it may open up a way of explaining why more matter than anti matter appears to have survived the birth of our universe.

Dr Hadley’s paper (just published in EPL (Europhysics Letters) and entitled “The asymmetric Kerr metric as a source of CP violation”) suggests that researchers have neglected the significant impact of the rotation of our Galaxy on the pattern of how sub atomic particles breakdown.

“Nature is fundamentally asymmetric according to the accepted views of particle physics. There is a clear left right asymmetry in weak interactions and a much smaller CP violation in Kaon systems. These have been measured but never explained. This research suggests that the experimental results in our laboratories are a consequence of galactic rotation twisting our local space time. If that is shown to be correct then nature would be fundamentally symmetric after all. This radical prediction is testable with the data that has already been collected at Cern and BaBar by looking for results that are skewed in the direction that the galaxy rotates.”

It is easy to neglect the effect of something as large as a galaxy because what seems most obvious to us is the local gravitation field of the Earth or the Sun, both of which have a much more readily apparent gravitational affect on us than that exerted by our galaxy as a whole. However Dr Hadley believes that what is more important in this case is an effect generated by a spinning massive body.

The speed and angular momentum of such a massive spinning body creates “frame dragging” on its local space and time twisting the shape of that space time and creating time dilation effects.

The spin of our Galaxy has a twisting effect on our local space that is a million times stronger than that caused by the spin of the Earth.

Dr Hadley believes that the “frame dragging” affect of the whole Galaxy explains all of those observations. Matter and antimatter versions of the same particle will retain exactly the same structure except that they will be mirror images of each other. It is not unreasonable to expect the decay of those particles to also begin as an exact mirror image of each other. However that is not how it ends. The decay may begin as a exact mirror image but the galactic frame dragging affect is significant enough to cause the different structures in each particle to experience different levels of time dilation and therefore decay in different ways. However the overall variation of the different levels of time dilation averages out when every particle in the decay is taken into account and CP violation disappears and parity is conserved.

The beauty of this theory is that it can also be tested. There are predictions that can be made and tested for. The massive array of data that already exists, that shows apparent CP violation in some decays, can be re-examined to see if it shows a pattern that is aligned with the rotation of the galaxy.

The paper only addressees how galactic scale frame dragging could explain experimental observations of apparent CP violation. However the explanation it provides also leaves open the door to those theorists who believe CP violation would be a useful tool to explain the separation of matter and antimatter at the birth of our universe and the subsequent apparent predominance of matter. Indeed that galactic scale frame dragging may even drag open that door a little wider. The universe’s earliest structures, perhaps the very earliest, may have had sufficient mass and spin to generate frame dragging effects that could have had a significant affect on the distribution of matter and antimatter.