Washington, DC–(ENEWSPF)–January 8, 2014. Last week, General Mills announced that the company will eliminate genetically engineered (GE) ingredients from its mainstay original cereal Cheerios. The action recognizes the overwhelming consumer demand for GE-free products. The move was met with a range of reactions in the environmental community, from cheers of victory for the GE-free movement to calls for broader action affecting General Mills’ product line, right-to-know labeling of all foods produced with GE ingredients, and compensation of farmers by patent holders of genetically engineered material that contaminates their crops. The General Mills’ announcement does not apply to all of its Cheerio products, o 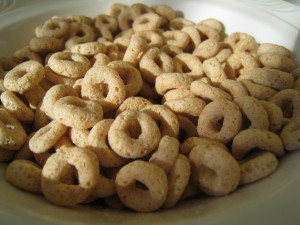 r its other products.

“Did we change Cheerios? No. Not really,” says a blog post by Tom Forsythe, vice president of Global Communications for General Mills. “Why change anything at all? It’s simple. We did it because we think consumers may embrace it,” he continues.

Some in the environmental community assert that this change is an attempt by the company to revive its image after spending millions of dollars to defeat state-level labeling initiatives in California in 2012, and Washington State in 2013. The ‘new’ Cheerios will contain the label “Not Made with Genetically Modified Ingredients.” General Mills’ move to label its most popular brand of cereal undercuts one of the main arguments used by opponents of GE labeling, namely that changing to non-GMO food ingredients is not economically feasible.

Despite the company’s tepid adjustment, the news does help to increase public awareness of GE food in the modern American diet, where nearly 80% of food items sold on supermarket shelves contain GE ingredients. This is important because without adequate labels consumers cannot determine whether the products they purchase do in fact contain these ingredients. And by and large, American consumers are calling for policies to adequately address the GE labeling issue. According to a New York Times poll conducted last year, 93% of people want foods containing GE ingredients labeled, and around 75% of consumers are worried about the effects of GE food on people’s health.

Last year, the grocery chain Whole Foods announced it would require labels on GE products by 2018, and supermarket rival Trader Joe’s already proclaims that it sells no products containing GE ingredients at its stores. Grassroots pressure pushed the introduction of GE labeling legislation in over 25 states last year, and while Maine and Connecticut passed labeling bills, they contain a “trigger clause” that delays implementation until similar legislation is passed in neighboring states, including one bordering state in the case of Connecticut, with an aggregate population of 20 million. Vermont may soon come on board, and additional ballot initiatives in the West will also play out in 2014, as GE labeling proponents have begun collecting signatures in Oregon and Colorado. A national GE labeling bill also remains in both houses of Congress, but has yet to be voted on in committee in either the Senate or the House.

Consumers have a right to know whether the foods they buy contain GE ingredients not only because of concerns over the safety of eating GE food, but also because of the direct and indirect effects of GE agriculture on the environment, wildlife, and the human health. In the Hawaiian islands, counties are taking a stand against GE agriculture that has led to widespread poisoning of sensitive environmental sites and entire communities. Associated with GE agriculture is the increased use of herbicides that GE crops are developed to tolerate. Repeated spraying of these herbicides, particularly glyphosate, the active ingredient in Roundup, destroys refuge areas for beneficial insects such as the Monarch butterfly, directly harms amphibians, and leads to resistance in weed species the GE technology was intended to control. The failure of GE technology was highlighted earlier this week as USDA released a Draft Environmental Impact Statement for GE corn and soybeans engineered to tolerate the toxic herbicide 2,4-D. With glyphosate resistance rampant, the agrichemical industry continues to resort to increasingly toxic combinations of chemicals, despite the presence of organic management practices that are more protective of human health and the environment and produce the same yield. Thus, for a multitude of reasons, consumers have the right to know the ingredients in the products they are purchasing.

General Mills has shown that it is economically viable to change the label on its products and provide consumers with information about GE ingredients. With increased public pressure, the company may take a larger, more substantive step and apply this policy to all its products, and support policies that would require other protections from genetically engineered organisms. In the meantime, consumers can purchase foods produced without GE organisms by seeking out the U.S. Department of Agriculture (USDA) Certified Organic Seal. Under organic certification standards, genetically modified organisms and their byproducts are prohibited. For many other reasons, organic products are the right choice for consumers.