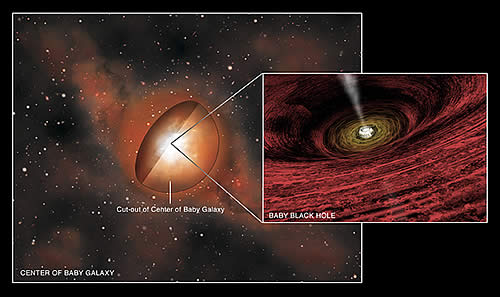 University of Hawaii-(ENEWSPF)- Using the most sensitive X-ray image ever taken, University of Hawaii astronomer Ezequiel Treister and colleagues have found the first direct evidence that black holes existed when the Universe was less than a tenth of its present age.

Between 30 and 100 percent of the 200 distant galaxies they observed contained a central black hole that was voraciously consuming the gas and stars that surrounded them.

This discovery was made with NASA’s orbiting Chandra X-ray Observatory.

“Black holes are objects whose gravity is so strong that not even light can escape from them. Until now, we had no idea what the black holes in these early galaxies were doing—or if they even existed,” said Treister, lead author of the study that appears in this week’s Nature. “Now we know they are there and they are growing like gangbusters.”

“It appears we’ve found a whole new population of baby black holes,” said co-author Kevin Schawinski of Yale University. “We think these babies will grow by a factor of about a hundred or a thousand, eventually becoming like the giant black holes we see today almost 13 billion years later.”

A population of very young black holes in the early Universe had been predicted, but not yet observed. Detailed calculations show that the total amount of black hole growth observed by this team is about a hundred times higher than recent estimates.

Because these very young black holes are nearly all enshrouded in thick clouds of gas and dust, optical telescopes frequently cannot detect them.  However, the high energies of X-ray light can penetrate these veils, allowing the black holes inside to be studied.

Founded in 1967, the Institute for Astronomy at the University of Hawaii at Manoa conducts research into galaxies, cosmology, stars, planets, and the sun. Its faculty and staff are also involved in astronomy education, deep space missions, and in the development and management of the observatories on Haleakala and Mauna Kea.

Established in 1907 and fully accredited by the Western Association of Schools and Colleges, the University of Hawaii is the state’s sole public system of higher education. The UH System provides an array of undergraduate, graduate, and professional degrees and community programs on 10 campuses and through educational, training, and research centers across the state. UH enrolls more than 50,000 students from Hawaii, the U.S. mainland, and around the world.