Washington, DC–(ENEWSPF)–April 14, 2014.  Bowing to political pressure and agrochemical industry opposition Sri Lanka’s government has taken a step back from its original decision to place a ban on one of the most widely used herbicides worldwide —glyphosate. Scientific evidence has tied glyphosate to the incurable, deadly kidney disease that has afflicted thousands of Sri Lankans. The delay marks a setback in efforts by scientists and activists to remove from the shelves a chemical widely used on tea and rice paddy plantations in Sri Lanka. 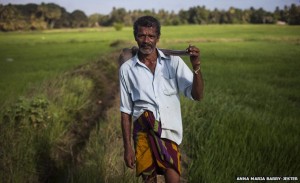 The decision to ban the chemical was initiated following the publication of a scientific report demonstrating that kidney disease was primarily caused by glyphosate. The report provides a summary of existing scientific information demonstrating kidney failure among farmers who were exposed to the popular herbicide. Indeed lead author Channa Jayasumana, PhD. explains that glyphosate bonds with toxic heavy metals in the environment such as cadmium and arsenic, forming stable compounds that are consumed in food and water and do not break down until they reach the kidneys.

“Glyphosate acts as a carrier or a vector of these heavy metals to the kidney,” said Dr. Jayasumana. The chemical was initially created as a chelating agent in industrial processes to form strong chemical bonds with metals, which now are showing up in the kidneys of exposed farmworkers in Sri Lanka, India, and Central America —where farmers are exposed to extreme heat, likely to become dehydrated, and certainly exposed to chemicals.

The study’s results are bolstered by a joint investigation by the World Health Organization (WHO) and the Sri Lankan government who detected both cadmium and glyphosate, as well as other pesticides and heavy metals, in the environment of endemic areas, and in kidney patients’ urine, blood and tissues.

The agrichemical manufacturer Monsanto disputes the idea that glyphosate is well suited to create bonds with heavy metals. “There is no evidence that glyphosate complexes effectively with arsenic, cadmium, or other nephrotoxic metals,” said Thomas Helscher. Director of Corporate Affairs at Monsanto. “Glyphosate is actually a relatively poor chelator for heavy metals when compared to pharmacological chelation agents.”

In an interview with The Center for Public Integrity Paul Capel, PhD., an hydrologist with the U.S. Geological Survey (USGS) said that glyphosate formed stronger bonds with metals than those formed by other herbicides. “As far as I know, there are no other common herbicides that would have this same sort of strength of interactions with metals,” said Dr. Capel.

Other countries around the world have taken steps to target glyphosate for its role in chronic kidney disease. Notably, El Salvador’s Legislative Assembly approved a ban on 53 agrichemicals including glyphosate in 2013 —a ban which has not yet been signed into law.

Meanwhile, the U.S. Environmental Protection Agency (EPA) is currently reviewing the registration of glyphosate, the review is expected to be completed by 2015. However, according to the Center for Public Integrity, the EPA has “not seen any pattern of kidney health effects” in its study of scientific literature.

In the absence of widespread adoption of organic practices that eliminate hazardous pesticides, worker protections for farmworkers must be strengthened. Consumers can do their part and help encourage the protection of the people who help put food on our table every day by purchasing organic. By buying organic, you support an agricultural system that does not heavily rely on the widespread application of dangerous pesticides. For more information on how organic is the right choice for both consumers and the farmworkers that grow our food, see Beyond Pesticides webpage, Health Benefits of Organic Agriculture.