Washington, DC–(ENEWSPF)–August 4, 2014.  The Clean Water Act (CWA) provides critical safeguards for our nation’s waterways, with the goal of fishable and swimmable waters for all residents of the United States. Last Thursday, the House of Representatives voted to strip away an important part of these protections concerning pesticides applied directly to U.S. waters. The Reducing Regulatory Burdens Act of 2013 (HR 935) would reverse a 2009 ruling in National Cotton Council v. EPA that requires CWA permits for pesticide users who spray over waterways. After failing in a vote under a suspension of the rules last Monday, the House took the bill back up and passed it 267-161.

“This is a good bill that reduces burdensome regulations without rolling back any environmental safeguards,” said U.S. Representative Bob Gibbs (R-OH), the bill’s sponsor, to The Hill. Unfortunately, Rep. Gibb’s statement couldn’t be farther from the truth. Under the deceptive title of “Reducing Regulatory Burdens,” this bill would instead eliminate critical CWA protections. “This legislation will undermine one of our nation’s most successful environmental laws, the Clean Water Act, in limiting the potential contamination of our nation’s waters by pesticides. All this would do is make it harder to locate the sources of pesticide contamination in our nation’s rivers, lakes and streams and make accountability for these discharges even more difficult,” said Rep. Donna Edwards (D-MD). However, hope for the bill’s ultimate defeat remains, as the Burlington Free Press indicates that it is unlikely to advance through the Senate. 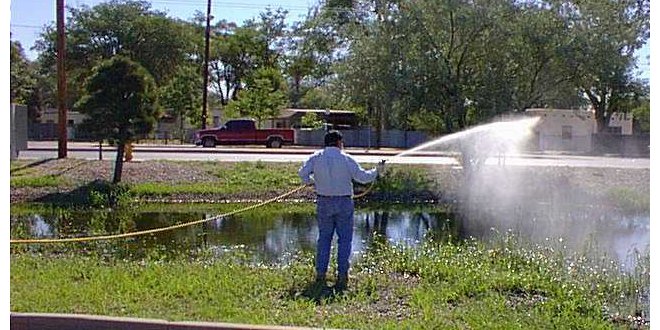 If passed, The Reducing Regulatory Burdens Act of 2013 would:
(1) undermine federal authority to protect U.S. waters under the Clean Water Act,
(2) allow the spraying of toxic chemicals into waterways without local and state oversight,
(3) not reduce claimed burdens to farmers since there is no burden as there is no real economic cost and agricultural activities are exempt, and
(4) contaminate drinking water sources and harm aquatic life.

The CWA general permit lets authorities know what is sprayed and when it is sprayed, so that the public may know what chemicals are used in their waterways and the potential dangers to sensitive aquatic ecosystems. Existing pesticide regulations under the Federal Insecticide Rodenticide and Fungicide Act (FIFRA) do not achieve these protections and most agricultural pesticide applications are exempt from CWA permit requirements. Permits do not prevent applicators from using pesticides, especially for public health emergencies. The permits do require applicators to record their pesticide applications and monitor application sites for any adverse incidents, which must be reported. For many states the cost of the permit is as low as $25. The myth that the CWA permits for pesticide discharges near waterways are burdensome for farmers has not been substantiated. Read Clearing up the Confusion Surrounding the New NPDES General Permit.

Already, nearly 2,000 waterways are impaired by pesticide contamination and many more have simply not been tested. The potentially high cost of public health problems, environmental clean-up efforts, and irreversible ecological damage that can result from unchecked, indiscriminate pollution of waterways is being ignored by opponents of CWA regulation. The reality is that this permitting process encourages pesticide users to seek alternative approaches to pest management if their current methods are going to contaminate nearby sources of water. This is underscored by the recent federal report by the U.S. Geological Survey (USGS) which finds that 83 percent of streams in agricultural and urban areas contain at least one aquatic community that was altered notably as a result of runoff from pesticides and contaminants. Previous USGS reports have documented pesticides and fertilizers in U.S. streams and drinking water. Herbicides like atrazine, metalachlor, and simizine are among those often found in surface waters of 186 rivers and streams sampled by USGS since the early 1990s, and are highly correlated with the presence of upstream wastewater sources or upstream agricultural and urban land use. Given this data and the vast knowledge that we have on organic pest management and non-chemical solutions, HR. 935 would be a disastrous step backwards.

Additionally, many believe that FIFRA sufficiently regulates pesticide use near waterways, but data shows this to be inaccurate, given the prevalence of surface and ground water contamination routinely detected in the nation’s streams, as well as numerous incidents of adverse ecological findings.  Furthermore, FIFRA and CWA have fundamentally different standards and methods in determining whether a pesticide will have unreasonable adverse effects on the environment and/or human health. CWA uses a health-based standard to protect waterways and requires permits when chemicals are directly deposited into rivers, lakes and streams, whereas FIFRA uses a highly generalized risk assessment that identifies risk and assumes benefits (except in the case of public health pesticide uses). The result is the allowance of a certain amount of pollution (i.e. harm) without consideration of the availability of safer alternatives.

For more information about pesticide permits and the importance of Clean Water Act protections, read our factsheet, Clearing up the Confusion Surrounding the New NPDES General Permit and visit our Threatened Waters page.