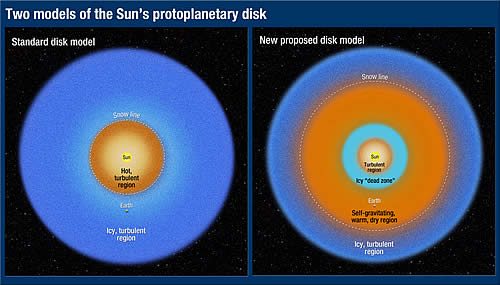 This illustration of two different disk models shows overhead views of the structure of the protoplanetary disk that encircled the newborn Sun 4.6 billion years ago. The Sun’s family of planets agglomerated from dust and ices within the disk.

The major difference between the two models is the location of the so-called snow line, which divides a warm, dry area of the disk from an icy, turbulent region.

In the standard disk model, shown at left, Earth formed beyond the snow line, in an icy region. Our planet should, therefore, contain lots of water because it formed from ices that would have been a major fraction of its composition. However, it’s estimated that less than 1 percent of Earth’s mass is locked up in water, which has puzzled scientists.

In the new disk model, shown at right, Earth formed in a warmer, dry region, outside the snow line, which is much farther away from the Sun. This model explains why Earth is comparatively dry. It provides new insights into estimates of the abundance of Earth-like planets in the galaxy. Credit: NASA, ESA, and A. Feild (STScI)

Baltimore, MD-(ENEWSPF)- With large swaths of oceans, rivers that snake for hundreds of miles, and behemoth glaciers near the north and south poles, Earth doesn’t seem to have a water shortage. And yet, less than one percent of our planet’s mass is locked up in water, and even that may have been delivered by comets and asteroids after Earth’s initial formation.

Astronomers have been puzzled by Earth’s water deficiency. The standard model explaining how the solar system formed from a protoplanetary disk, a swirling disk of gas and dust surrounding our Sun, billions of years ago suggests that our planet should be a water world. Earth should have formed from icy material in a zone around the Sun where temperatures were cold enough for ices to condense out of the disk. Therefore, Earth should have formed from material rich in water. So why is our planet comparatively dry?

A new analysis of the common accretion-disk model explaining how planets form in a debris disk around our Sun uncovered a possible reason for Earth’s comparative dryness. Led by Rebecca Martin and Mario Livio of the Space Telescope Science Institute in Baltimore, Md., the study found that our planet formed from rocky debris in a dry, hotter region, inside of the so-called "snow line." The snow line in our solar system currently lies in the middle of the asteroid belt, a reservoir of rubble between Mars and Jupiter; beyond this point, the Sun’s light is too weak to melt the icy debris left over from the protoplanetary disk. Previous accretion-disk models suggested that the snow line was much closer to the Sun 4.5 billion years ago, when Earth formed.

"Unlike the standard accretion-disk model, the snow line in our analysis never migrates inside Earth’s orbit," Livio said. "Instead, it remains farther from the Sun than the orbit of Earth, which explains why our Earth is a dry planet. In fact, our model predicts that the other innermost planets, Mercury, Venus, and Mars, are also relatively dry. "

The results have been accepted for publication in the journal Monthly Notices of the Royal Astronomical Society.

In the conventional model, the protoplanetary disk around our Sun is fully ionized (a process where electrons are stripped off of atoms) and is funneling material onto our star, which heats up the disk. The snow line is initially far away from the star, perhaps at least one billion miles. Over time, the disk runs out of material, cools, and draws the snow line inward, past Earth’s orbit, before there is sufficient time for Earth to form.

"If the snow line was inside Earth’s orbit when our planet formed, then it should have been an icy body," Martin explained. "Planets such as Uranus and Neptune that formed beyond the snow line are composed of tens of percents of water. But Earth doesn’t have much water, and that has always been a puzzle."

Martin and Livio’s study found a problem with the standard accretion-disk model for the evolution of the snow line. "We said, wait a second, disks around young stars are not fully ionized," Livio said. "They’re not standard disks because there just isn’t enough heat and radiation to ionize the disk."

So, if the disks aren’t ionized, mechanisms that would allow material to flow through the region and fall onto the star are absent. Instead, gas and dust orbit around the star without moving inward, creating a so-called "dead zone" in the disk. The dead zone typically extends from about 0.1 astronomical unit to a few astronomical units beyond the star. (An astronomical unit is the distance between Earth and the Sun, which is roughly 93 million miles.) This zone acts like a plug, preventing matter from migrating towards the star. Material, however, piles up in the dead zone and increases its density, much like people crowding around the entrance to a concert, waiting for the gates to open.

The dense matter begins to heat up by gravitational compression. This process, in turn, heats the area outside the plug, vaporizing the icy material and turning it into dry matter. Earth forms in this hotter region, which extends to around a few astronomical units beyond the Sun, from the dry material. Martin and Livio’s altered version of the standard model explains why Earth didn’t wind up with an abundance of water.

Martin cautioned that the revised model is not a blueprint for how all disks around young stars behave. "Conditions within the disk will vary from star to star," Livio said, "and chance, as much as anything else, determined the precise end results for our Earth."