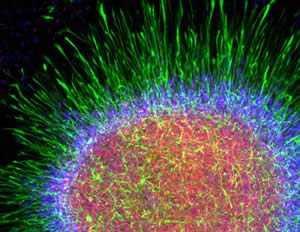 Astrocytes are star-shaped cells that are the most common cell in the human brain and have now been grown from embryonic and induced stem cells in the laboratory of UW-Madison neuroscientist Su-Chun Zhang. Once considered mere putty or glue in the brain, astrocytes are of growing interest to biomedical research as they appear to play key roles in many of the brain’s basic functions, as well as neurological disorders ranging from headaches to dementia. In this picture astrocyte progenitors and immature astrocytes cluster to form an “astrosphere.” The work was conducted at UW-Madison’s Waisman Center. (Photo: provided by Robert Krencik/ UW-Madison)

Madison, WI-(ENEWSPF)- Pity the lowly astrocyte, the most common cell in the human nervous system.

Long considered to be little more than putty in the brain and spinal cord, the star-shaped astrocyte has found new respect among neuroscientists who have begun to recognize its many functions in the brain, not to mention its role in a range of disorders of the central nervous system.

Now, writing in the current (May 22) issue of the journal Nature Biotechnology, a group led by University of Wisconsin-Madison stem cell researcher Su-Chun Zhang reports it has been able to direct embryonic and induced human stem cells to become astrocytes in the lab dish.

The ability to make large, uniform batches of astrocytes, explains Zhang, opens a new avenue to more fully understanding the functional roles of the brain’s most commonplace cell, as well as its involvement in a host of central nervous system disorders ranging from headaches to dementia. What’s more, the ability to culture the cells gives researchers a powerful tool to devise new therapies and drugs for neurological disorders.

“Not a lot of attention has been paid to these cells because human astrocytes have been hard to get,” says Zhang, a researcher at UW-Madison’s Waisman Center and a professor of neuroscience in the UW-Madison School of Medicine and Public Health. “But we can make billions or trillions of them from a single stem cell.”

Although astrocytes have gotten short shrift from science compared to neurons, the large filamentous cells that process and transmit information, scientists are turning their attention to the more common cells as their roles in the brain become better understood. There are a variety of astrocyte cell types and they perform such basic housekeeping tasks as helping to regulate blood flow, soaking up excess chemicals produced by interacting neurons and controlling the blood-brain barrier, a protective filter that keeps dangerous molecules from entering the brain.

Astrocytes, some studies suggest, may even play a role in human intelligence given that their volume is much greater in the human brain than any other species of animal.

“Without the astrocyte, neurons can’t function,” Zhang notes. “Astrocytes wrap around nerve cells to protect them and keep them healthy. They participate in virtually every function or disorder of the brain.”

The ability to forge astrocytes in the lab has several potential practical outcomes, according to Zhang. They could be used as screens to identify new drugs for treating diseases of the brain, they can be used to model disease in the lab dish and, in the more distant future, it may be possible to transplant the cells to treat a variety of neurological conditions, including brain trauma, Parkinson’s disease and spinal cord injury. It is possible that astrocytes prepared for clinical use could be among the first cells transplanted to intervene in a neurological condition as the motor neurons affected by the fatal amyotrophic lateral sclerosis, also known as Lou Gehrig’s disease, are swathed in astrocytes.

“With an injury or neurological condition, neurons in the brain have to work harder, and doing so they make more neurotransmitters,” chemicals that in excess can be toxic to other cells in the brain, Zhang says.

“One idea is that it may be possible to rescue motor neurons by putting normal, healthy astrocytes in the brain,” according to Zhang. “These cells are really useful as a therapeutic target.”

The technology developed by the Wisconsin group lays a foundation to make all the different species of astrocytes. What’s more, it is possible to genetically engineer them to mimic disease so that previously inaccessible neurological conditions can be studied in the lab.

In addition to Zhang, co-authors of the new Nature Biotechnology paper include Robert Krencik, Jason Weick and Zhijian Zhang, all of UW-Madison, and Yan Liu of Fudan University Shanghai Medical School. The work was supported by the ALS Foundation, the National Institute of Neurological Disorders and Stroke, the National Multiple Sclerosis Society, the Bleser Family Foundation and the Busta Family Foundation.