Washington, DC–(ENEWSPF)–November 20, 2013. Illinois public health officials say that more than 200 Illinois schools and day care centers have failed to comply with the most basic of the state’s pest management regulations, and for the first time could face fines if they do not comply. According to the Illinois Department of Public Health (IDPH), the state’s IPM regulations, including the requirements for reporting how pests are managed, are designed to protect children in day care centers and schools from unnecessary applications of pesticides. 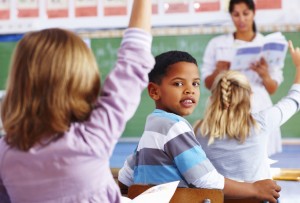 According to Beyond Pesticides, a strong IPM definition and policy is one of the best ways to minimize or eliminate children’s exposure to pesticides while at school. IPM is a term that is used loosely with many different definitions and methods of implementation. Generally, IPM is a program of prevention, monitoring, and control that offers the opportunity to eliminate or drastically reduce pesticides in schools, and minimize the toxicity of and exposure to any products that are used. Education, in the form of workshops, training sessions and written materials, is an essential component of an IPM program -for everyone from administrators, maintenance personnel, cafeteria staff and nurses, to parents and students. According to IDPH, over time, an IPM program can cost less than conventional pest management practices by reducing the school’s or day care center’s dependency on pesticides.

“Integrated Pest Management is a means of managing pests that doesn’t rely on a single method, such as the routine and often unnecessary application of pesticides,” said Illinois Department of Public Health Director LaMar Hasbrouck, M.D.  According to Dr. Hasbrouck, “It combines methods such as improved sanitation, monitoring, physical barriers and maintenance to reduce the likelihood of pest infestations. Facilities that practice IPM often see a reduction in the number of pests and pesticides applied, as well as a reduction in pest control costs.”

An investigation found that school districts in Arlington Heights, Elmhurst, Oak Park and Harvey –along with special education districts in Highland Park, St. Charles, and Crescent City– are among those cited by the IDPH report for not filing IPM forms to document how the school or daycare center plan to control pests and the use of any pesticides.  According to the IDPH, an IPM program  “greatly reduces the chance of accidental exposure of pesticides to children and staff,” and can help reduce the use of pesticides overall by promoting non-chemical methods – like better sanitation –to control bugs and animals. More than 90 day care centers in Chicago alone have been cited as non-complaint, along with another 124 day care centers located in the Chicago suburbs. A total 295 school districts and day care centers are cited by the state, with 242 in the greater Chicago area. The agency is now geared up to work to ensure schools and day care centers comply by sending mass mailings, holding seminars, and working with the Illinois Department of Children and Family Services, which licenses Illinois day cares.

According to the Centers for Disease Control and Prevention (CDC), children between the ages of six and eleven have the highest levels of pesticides in their bodies when compared to any other age category. Some specific pesticides have been found at levels 200% higher in children than adults.  The U.S. Environmental Protection Agency (EPA), National Academy of Sciences, and the American Public Health Association, among others, have voiced concerns about the dangers that pesticides pose to children. The body of evidence in the scientific literature shows that pesticide exposure can adversely affect a child’s neurological, respiratory, immune, and endocrine system, even at low levels. Recently, the American Academy of Pediatrics published a report, which concluded that, “Children encounter pesticides daily and have unique susceptibilities to their potential toxicity.”

Pesticides on home lawns and in schools are significant pathways of childhood exposures. Of the 30 most commonly used lawn pesticides, 19 can cause cancer, 13 are linked to birth defects, 21 can affect reproduction and 15 are nervous system toxicants. Pesticide exposure is known to cause acute symptoms, such as nausea, headache, dizziness, asthma attacks, and respiratory irritation, which are often diagnosed as flu symptoms. Studies have reported that pesticides are also linked to chronic effects such as developmental problems and learning disabilities, like ADHD and autism, nervous system disorders, immune deficiency, and cancer. Visit Beyond Pesticides’ Pesticide Induced Disease Database for more information on pesticides and disease.

Many other school districts are turning away from managing grounds with toxic chemicals. Connecticut currently has a statewide prohibition on the use of toxic pesticides on school grounds. The state of New York also acted to protect children by passing the Child Safe Playing Field Act in 2010, which requires that all schools, preschools, and day care centers stop using pesticides on any playgrounds or playing field. In Boulder, CO, children led a rally to protest the approval of two pesticides on city parks. In spite of this, many schools across the country continue to use toxic pesticides. On the other hand, many school districts are lagging behind. A 2013 survey on pesticide use on public school grounds across the state of Maine found that 51% of schools surveyed spray pesticides, many of which have been linked to human health impacts, including kidney disease and links to non-Hodgkin’s Lymphoma.