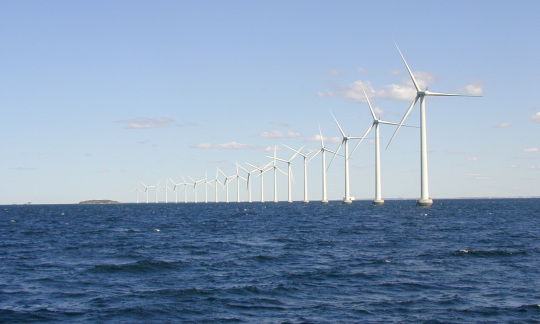 “Today’s announcement not only marks another milestone for the U.S. offshore wind energy program, but also demonstrates how our collaborative efforts with state, local and private sector partners can advance a clean energy future in the United States,” said Secretary Jewell. “Industry interest remains strong with more than a dozen qualified bidders as we take another step closer to harnessing the enormous potential of offshore wind energy for Atlantic coastal communities.”

“New York is a critical component in building a robust U.S. offshore wind industry,” said BOEM Director Abigail Ross Hopper. “The process to develop and refine the New York lease area, as well as the online auction, reflects the deep commitment BOEM has to listening and responding to stakeholders and ensuring that all voices are heard as we forge a path to a clean energy future.”

To date, BOEM has awarded eleven commercial wind leases, including nine through the competitive lease sale process. These lease sales have generated more than $16 million in winning bids for more than a million acres in federal waters.

After reviewing comments received on the Environmental Assessment, BOEM removed about 1,780 acres from the lease area due to environmental concerns regarding a seafloor feature known as the Cholera Bank. In a comment letter, the National Marine Fisheries Service identified the Cholera Bank feature as a sensitive habitat to be avoided for the placement of structures. As a result of this removal, the revised lease area will be approximately two percent smaller than the lease area considered in the Proposed Sale Notice.

In response to concerns raised by commercial fishing interests, BOEM also has included a lease requirement for the lessee to develop a publicly available Fisheries Communications Plan and work with a Fisheries Liaison to facilitate communication with the fishing industry.

The Final Sale Notice also contains additional provisions that respond to public comments. For instance, BOEM will consider monetary and nonmonetary factors (i.e., 10 percent credit for government authorities) in determining the winner. The Final Sale Notice contains more information about these requirements and other relevant sale items, such as deadlines and milestones for bidders, the area available for leasing, lease provisions and conditions, auction details, criteria for evaluating bids, award procedures and lease execution.

Under the terms of the Final Sale Notice, which will be published in the Federal Register on October 31, the lease area will be auctioned as Lease OCS-A 0512. Concurrently, BOEM will release a revised environmental assessment (EA) for commercial wind lease issuance and related activities within the Wind Energy Area offshore New York. The EA considers reasonably foreseeable environmental and socioeconomic impacts from issuing a renewable energy lease and conducting site characterization (e.g., surveys) and assessment (e.g., installation and operation of meteorological towers and buoys) activities in the designated offshore area.

As a result of the analysis in the revised EA, BOEM issued a Finding of No Significant Impact, which concluded that reasonably foreseeable environmental effects associated with the issuance of the commercial wind lease and related activities would not significantly impact the environment.

The revised EA addresses comments received in response to an environmental assessment published in June 2016 for public review. Those comments can be viewed by searching for Docket ID BOEM-2016-0038 here.

For more information on the New York lease area and upcoming auction, as well as the revised EA, visit BOEM’s website at http://www.boem.gov/New-York.