Washington, DC–(ENEWSPF)–October 22, 2013.  Nearly a week after plant geneticists from the world’s largest agrichemical companies accepted the World Food Prize, an Associated Press (AP) investigation links the effect of their work to soaring pesticide use and resulting health problems. According to the AP, the advent of “no-till” farming methods in Argentina with the use of genetically engineered (GE) crops and companion pesticides has caused significant health impacts in farming towns abutting GE fields. Since the introduction of these practices in Argentina by agrichemical companies such as Monsanto, cancer rates have skyrocketed and the number of birth defects has quadrupled. 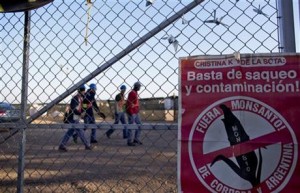 Argentina was an early adopter of GE technology in 1996, when it was billed as the silver bullet to solve world hunger with increased crop productivity, and improved human and environmental health resulting from decreased pesticide use. The most widely used GE crops, such as Monsanto’s Roundup Ready line of corn and soybeans, allow farmers to apply the herbicide glyphosate during and after seed plantings in order to kill weeds without risk of the main crop dying off. Today, almost all the corn, soy, and cotton produced in the country are GE.

As the AP reports, and researchers in the U.S. have corroborated, GE technology only decreases pesticide use for a short period of time. After the brief decline in Argentina, pesticide use soared from 9 million gallons in 1990 to 84 million gallons today as weed resistance developed to glyphosate. In response, agrichemical companies have encouraged the use of more hazardous and toxic chemicals to kill weeds. Argentinian farmers are now mixing in and applying herbicides such as 2,4-D, a chlorophenoxy herbicide that made up half of Agent Orange, the chemical mixture used to defoliate forests and croplands in the Vietnam War. 2,4-D has also been linked to kidney/liver damage, neurotoxicity, and birth defects. Earlier this year the U.S. Department of Agriculture (USDA) delayed the introduction of a new generation of GE crops resistant to 2,4-D.

GE crops’ current mainstay chemical glyphosate is also associated with a wide range of health effects. The AP references a study performed by Argentine doctor Andres Carrasco, MD that found low doses of glyphosate can cause spinal defects in frogs and chickens in communities where farm chemicals are ubiquitous. A 2008 study links glyphosate exposure to a 2x increase in non-Hodgkin lymphoma. A review of the literature on glyphosate earlier this year by scientists at the Massachusetts Institute of Technology (MIT) found concerning evidence linking the chemical to inhibition of the cytochrome P450 enzymes, which are critical detoxifying agents in the human body.

“If it’s possible to reproduce this in a laboratory, surely what is happening in the field is much worse,” Dr. Carrasco said. “And if it’s much worse, and we suspect that it is, what we have to do is put this under a magnifying glass.”

Monsanto has disputed findings that link glyphosate to adverse health effects. The company said in response to the AP‘s questions that chemical safety tests should only be done on live animals, and that injecting embryos is “less reliable and less relevant for human risk assessments.” Dr. Carrasco’s study, Monsanto said that the results of “are not surprising given their methodology and unrealistic exposure scenarios.” On the MIT study, Monsanto released a blog post decrying the research as “Another Bogus ‘Study,’” which “fails to consider other hypothetical causes.”

“Glyphosate is even less toxic than the repellent you put on your children’s skin,” said Pablo Vaquero, Monsanto’s corporate affairs director in Buenos Aires. “That said, there has to be a responsible and good use of these products because in no way would you put repellent in the mouths of children and no environmental applicator should spray fields with a tractor or a crop-duster without taking into account the environmental conditions and threats that stem from the use of the product.”Children are uniquely susceptible to the impacts of pesticide exposure because they take in more of a chemical relative to their body weight and have developing organ systems. As a point of fact, children that eat a conventional diet are putting pesticides in their mouths. A 2008 study found that children that switch from a diet of conventional produce to an all organic diet dramatically reduce the levels of pesticide in their urine within five days. However, in the U.S., regulators at the Environmental Protection Agency (EPA) recently more than doubled the allowable levels of the herbicide glyphosate on certain food commodities.

The AP documented dozens of cases around Argentina where poisons are applied in ways unanticipated by regulatory science or specifically banned by existing law. “It is evident that real world applications of GE technology run contrary to the many benefits extolled by agrichemical corporations,” said Beyond Pesticides executive director Jay Feldman. The on-the-ground impacts of GE agriculture in Argentina paint a grim picture for the country’s farming communities. A government funded study in Ituzaingo Annex, Argentina found that 80% of children surveyed carried traces of pesticide in their blood.

“We didn’t set out to find problems with agrochemicals. We went to see what was happening with the people,” said Damian Verzenassi, M.D of the Environment and Health program at the National University of Rosario’s medical school. Dr. Verzenassi’s epidemiological study in Argentina’s Santa Fe province found cancer rates two to four times higher than the national average, with particular focus on breast, prostate, and lung cancers. “It could be linked to agrochemicals,” he said. “They do all sorts of analysis for toxicity of the first ingredient, but they have never studied the interactions between all the chemicals they’re applying.” The synergistic effects of pesticide exposure compose one of the “big unknowns” in current risk assessment methodologies employed by regulators.

The AP’s report found villagers using empty pesticide containers to store drinking and bathing water. “They prepare the seeds and the poison in their houses. And it’s very common, not only in Avia Terai but in nearby towns, for people to keep water for their houses in empty agrochemical containers,” explained surveyor Katherina Pardo. “Since there’s no treated drinking water here, the people use these containers anyway. They are a very practical people.” 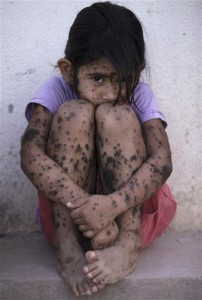 Aixa Cano, a shy 5-year-old, has hairy moles all over her body. Her neighbor, 2-year-old Camila Veron, was born with multiple organ problems and is severely disabled. Doctors told their mothers that agrochemicals may be to blame.

“They told me that the water made this happen because they spray a lot of poison here,” said Camila’s mother, Silvia Achaval. “People who say spraying poison has no effect, I don’t know what sense that has because here you have the proof,” she added, pointing at her daughter.

Across the globe, communities are feeling the brunt of chemical- intensive GE agriculture and beginning to fight back. Just last week,  Kauai, Hawaii, dubbed “ground zero” for pesticides and experimental GE technology by local activists, approved new restrictions for agrichemical corporations operating on the island. In Mexico, a judge issued an injunction on the planting and selling of GE seed throughout the country earlier this month.

The best way to stop the planting of genetically engineered crops in the U.S. is to purchase foods that have the USDA certified organic seal. Organic agriculture has a profound role to play in reducing and eliminating the widespread poisoning seen in pesticide intensive GE agriculture. Without the use of highly toxic and persistent synthetic pesticides, organic farming is healthier for farmworkers, communities, and consumers. Under organic standards, genetically modified organisms and their byproducts are prohibited in food production. For more information, see Beyond Pesticides’ webpage on organic agriculture.