Washington, DC–(ENEWSPF)–May 12, 2015.  Last week Kaua’i County Councilmember Gary Hooser returned from agrichemical giant Syngenta’s shareholder meeting in Basel, Switzerland, where he addressed the company and its stakeholders on the corporation’s lawsuit against the small Hawaiian island of Kaua’i. The Councilmember indicates that, although the company is unlikely to meet his request to drop its lawsuit against Ordinance 960, which generally creates buffer zones prohibiting pesticide use around schools, hospitals, and parks, the trip overall was a success. “Our main purpose was one of education and information, to tell our story in the home city of Syngenta, and we were greeted with open arms and really managed to get the word out,” Mr. Hooser said to The Garden Isle on Monday.

VIDEO: See Councilmember Hooser’s speech to Syngenta: Part 1 | Part 2 (Note: Credit and thanks to Kauai activist Fern Rosenstiel for filming this video despite attempts by Syngenta to suppress her ability to do so.) 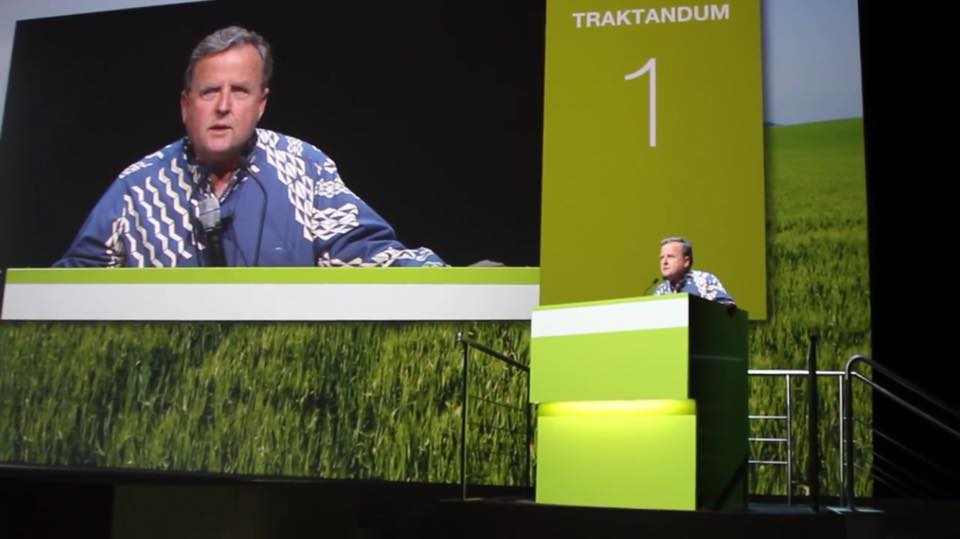 In a related matter, it was announced earlier this week that a federal court awarded over $500,000 to 15 Kaua’i residents who launched a lawsuit (separate from the one above) against another agrichemical company on the island, DuPont Pioneer. Residents won on grounds of property damage and loss of use and enjoyment of their property after being subject to the incessant blowing of pesticide-laden red dust from the company’s Waimea Research Center field. The verdict indicates that the “seriousness of the harm to each plaintiff outweighs the public benefit of Pioneer’s farming operation.”

Kauai, along with Maui and the Big Island, have been locked in legal battles with agrichemical corporations after successfully passing modest reforms aimed at limiting their residents exposure to the pesticides sprayed on genetically engineered (GE) crops grown in the state. Chemical companies claim that local governments are preempted from enacting pesticide legislation more restrictive than Hawai’i state law.

At the Syngenta shareholder meeting, Councilmember Hooser brought a straightforward message to the corporation and its shareholders. “Withdraw the lawsuit from the County of Kauaʻi, honor and comply with our laws. Treat us with the same respect, the same dignity and the same protections that you give the people of Switzerland. Do not spray chemicals in my community that you cannot spray in your own community,” he said. The Councilmember was referencing the use of the herbicides atrazine and paraquat, chemicals which are banned from use in Switzerland, but sprayed constantly and even found in drinking water in Hawaii communities.

Councilmember Hooser attended the shareholder event as an individual with support from the Hawaii Alliance for Progressive Action, for which he is the volunteer President of the Board, and not as a representative of the Kauai County Council. He was invited by the Swiss nonprofit Multiwatch, which transferred a share of Syngenta stock to him in order to allow him to speak.

“What we can say about our role on Kauai is that Syngenta has been part of the community on Kauai for more than 40 years providing jobs and other benefits to the rural economy since sugar cane and pineapple production declined,” Syngenta spokesman Mark Phillipson wrote in an email to The Garden Isle. “The island offers unrivaled climatic and agronomic conditions for crop research, which has benefited millions of growers around the world. We take very seriously our responsibility toward Kauai’s natural environment and the communities where we work.”

In a recent email to supporters, Councilmember Hooser wrote, “What kind of good neighbor uses toxic pesticides by the ton in their neighbor’s yard but yet uses zero of these chemicals in their own yard back home in Switzerland because their laws will not allow it (all the while telling you how safe it is)?” He referenced a recent New York Times article of the company misrepresenting the use of atrazine in its own country.

In response to the Dupont Pioneer ruling, he added, “The façade presented through the “Good Neighbor” persona created by the community relations and media guru’s of these companies is quickly evaporating.”

VIDEO: Councilmember Hooser’s visit was covered by Swiss media, and is viewable here.