Washington, DC–(ENEWSPF)–October 23, 2012.  It’s a story we’ve heard for far too long. Research published yesterday in the journal Nature concludes that when bees are exposed to pesticides their colonies have a greater propensity to fail, again raising the urgent need for regulatory action to protect pollinators. This study adds to the body of science that shows toxic pesticide dependency in agriculture is undermining our food supply. 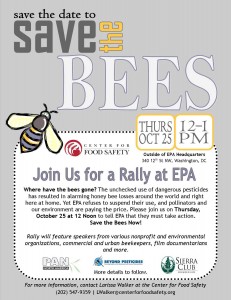 Concerned citizens Take Action! Join us this Thursday, October 25th at Noon outside EPA Headquarters (340 12th St NW (12th and Pennsylvania Ave)) for a rally to tell EPA that it must act to protect pollinators now.

The rally will feature speakers from various nonprofit and environmental organizations, commercial and urban beekeepers, film documentarians and more, including:

While the study only focused on bumblebees, Prof. Douglas Kell of The Biotechnology and Biological Sciences Research Council notes, “Bumblebees play an important role in pollination, working earlier in the morning and later into the evening than many bees. Understanding the threats to all insect pollinators is vital if we are to ensure we mitigate the impact of their decline on the production of agricultural and horticultural crops. The results of this study contribute to a wider initiative to help inform strategies for securing the futures of all insect pollinators.”

The research reveals that chronic exposure to two commonly-used pesticides, the neonicotinoid imidacloprid, and the synthetic pyrethriod λ-cyhalothrin (LC), at field level concentrations impairs natural foraging behavior and increases worker morality. Neonicotinoids, such as imidacloprid, are taken up by a plant’s vascular system and expressed through the pollen, nectar, and gutation droplets from which bees forage and drink. Synthetic pyrethriods such as LC are sprayed directly on crops, including their flowers, where bees can become topically exposed. The authors note, “Foraging bees are thus simultaneously exposed to both chemicals in the field, making them excellent candidates to investigate the potential for combinatorial effects of pesticide exposure.”

Of the colonies exposed to imidacloprid, there was a decrease in birth rates for worker bees, and a higher proportion of foragers failed to return to the nest. A decrease in foraging success means that bees will bring back less pollen. Less pollen means less food for bees, which would match up to the lower birth rates of worker bees seen in the study. These results correspond closely to two studies published earlier this year in the journal Science. The first, titled “A Common Pesticide Decreases Foraging Success and Survival in Honey Bees,” revealed that the honeybees exposed to the neonicotinoid thiamethoxam were less likely to return to the hive after foraging. The second, titled “Neonicotinoid Pesticide Reduces Bumble Bee Colony Growth and Queen Production,” shows that bumble bee colonies exposed to imidacloprid suffer an 85% reduction in the production of new queens compared to unexposed colonies.

For colonies exposed solely to LC, and those exposed to both pesticides, there is a much higher rate of dead worker bees, with 43% of the workers living less than 4 days after birth. This means that colonies are putting a significant amount of effort into nursing bees that were not able to contribute to the future growth of the hive. Colonies exposed to both pesticides fare the worst in the study. Authors note, “Indeed, M colonies in our study were consistently negatively affected in all our measures of worker behavior, suffered the highest overall worker losses (worker mortality and forager losses), which were twice as great as for control colonies, and two colonies did in fact fail.”

The authors of the study go on to note that traditional risk assessments only preform tests on one pesticide at a time. This fact is true in the U.S.; EPA does not require registrants to study the possible synergistic effects of pesticide combinations, even though bees in the field are exposed to multiple pesticides through a number of different routes.

Moreover, EPA does not require studies on the chronic toxicity of pesticides for non-target insects such as pollinators. While this study spanned four weeks, with many effects only taking place after several days of exposure, EPA only requires a 96-hour test to be performed. While the agency is supposed to require a field study before a chemical is approved, in terms of neonicotinoids no acceptable field studies on pollinators have been performed to date.

EPA failed to follow its own regulations when it granted a conditional, or temporary, registration to the neonicotinoid clothianidin in 2003 without required data establishing that the pesticide would have no “unreasonable adverse effects” on pollinators. EPA continues to allow the use of clothianidin nine years after acknowledging that it had an insufficient legal basis for initially allowing its use. In July, France banned the use of the neonicotinoid thiamethoxam in order to protect pollinators, but EPA has effectively told pollinators to buzz off. Several U.S. policymakers, including Representative Edward Markey (D-MA), Senators Kristen Gillibrand (D-NY), Patrick Leahy (D-VT), and Sheldon Whitehouse (D-RI) have expressed their concern to EPA, but EPA has refused to budge, denying a petition by millions of concerned citizens that would recognize that bees face an “imminent hazard.”

So we’re bringing the fight to EPA’s front door. With one in three bites of food dependent upon pollination, the stakes couldn’t be higher. Join us this Thursday, October 25th at Noon and let EPA know it’s not okay to put our pollinators, our food supply – our future at risk.

If you’re interested in learning more about the research involving the recent global decline of pollinators, visit Beyond Pesticides’ Pollinator Protection page to learn what the science shows.