Washington, DC–(ENEWSPF)–November 18, 2014.  Four workers died this past weekend when the valve on a container of methyl mercaptan, a compound used in the production of insecticides, fungicides, and plastics, malfunctioned at a La Porte, Texas chemical plant owned by DuPont. The chemical, which has a strong odor of rotten eggs, spread throughout the Houston metropolitan area, causing concern for people up to 40 miles away. This incident is the latest in a string of chemical disasters for DuPont and across the United States. A 2011 U.S. Chemical Safety Board (CSB) investigation determined that “a series of preventable safety shortcomings” led to three accidents over a 33-hour period that resulted in the death of one worker from phosgene gas exposure at a DuPont plant in Belle, West Virginia. CSB, an independent federal agency tasked with investigating chemical accidents, has begun a probe into the recent incident. The Occupational Safety and Health Administration (OSHA) will conduct a separate investigation. 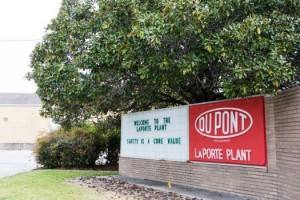 In 2013, in the wake of an explosion at a chemical plant in West, Texas that claimed the lives of 15 people and injured hundreds more, President Obama signed an Executive Order entitled Improving Chemical Facility Safety and Security, in an effort to improve the safety of U.S. chemical manufacturing for workers and those in surrounding communities. Beyond Pesticides joined with over 100 organizations, including health, labor, consumer, and environmental justice groups in a letter urging then newly appointed Environmental Protection Agency Administrator Gina McCarthy to make chemical disaster prevention a priority initiative. In the letter, groups advocated for the only fool-proof way to prevent chemical disasters; switching to safer chemical processes. While the President’s Executive Order took important steps to move the country toward safer chemical processes, many groups at the time questioned whether the Order was forceful enough. A report on the Executive Order was delivered to the President in May 2014, though it is too early to say whether further action would have prevented the recent disaster at the DuPont plant.

The chemical released in the DuPont incident, methyl mercaptan, is a colorless flammable gas with an unpleasant odor described as rotten cabbage, according to the Agency for Toxic Substances and Disease Registry. OSHA has set legally acceptable airborne exposure limits of the compound at 10ppm. Methyl mercaptan acts as a central nervous system depressant as well as a respiratory-tract and skin irritant at high levels of exposure. The La Porte plant uses methyl mercaptan for the production of methomyl, a carbamate class of insecticide shown to be highly toxic to humans, with the potential to cause cholinesterase inhibition, resulting in flu-like symptoms such as weakness, lack of appetite, and muscle aches. Although methomyl is not registered for residential use, tolerance levels for the insecticide have been set on over 80 crops.

Many groups, including Beyond Pesticides, have focused on encouraging safer alternatives in chemical processing since before the tragic events that occurred nearly 30 years ago in Bhopal, India by Union Carbide, now a wholly owned subsidiary of Dow Chemical. In 2008, an explosion at a chemical plant in Institute, West Virginia owned by Bayer released high levels of methyl isocyanate, the same chemical released in the Bhopal disaster, and also used as an intermediate in the production of methomyl. Two Bayer workers died as a result of the explosion. Although Bayer reduced the amount of methyl isocyanate it held in its production facility by 80% after the disaster, the company kept up to 50,000 pounds of the chemical stored at this location until 2011, when it announced it would stop all manufacture of the toxic chemical.

According to the 2011 risk-management plan for DuPont’s La Porte plant, 122,000 pounds of methyl mercaptan were stored on site. In addition to the toxicity of the end use product, methomyl, these disasters highlight dangers inherent in the production of pesticides. From cradle to grave, these chemicals pose unnecessary hazards to workers and the environment. As the 2013 letter to EPA Administrator McCarthy explains, “Prevention is the only fool-proof way to ensure the safety of millions of people whose communities are needlessly in danger.” Though a focus on investing in safer alternatives to toxic pesticides, and fostering alternative systems like organic agriculture, which do not require these chemicals, future tragedies like what occurred this past weekend in La Porte, Texas can be prevented.